Chrome's performance vs. other browsers

The Betanews site has just published a comparison of the performances of browsers, including the latest versions and even versions under development.

They are compared to Internet Explorer 7. So the next version of Chrome, Chrome 3 will be 16 times faster than IE7!

The comparison takes into account different criteria by combining the results of several testing tools:

The results are in the table below: 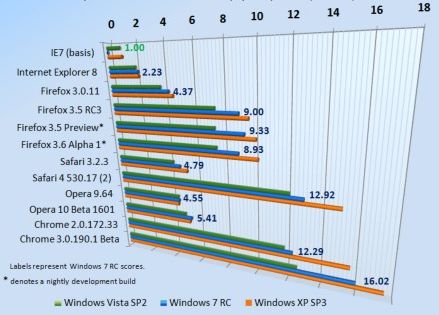 Some notable figures on Vista:

Chrome is thus the ideal browser for web applications!

It is possible to know the memory usage through the task manager but Chrome has its own internal version: press both the SHIFT + ESC keys.