Description of the Scriptol programming language

Scriptol is a modern programming language, designed to be simple and easy to learn, allowing new users ready to program in some hours. The programming time is largely decreased.
Scriptol is object-oriented, xml-oriented, extensible, universal, uses PHP libraries or Node.js modules. It is universal, that means it is convenient for scripting, to build applications or to make dynamic web pages.
A free scriptol compiler is available for Windows and Unix.
The version 3 of the language compiled to JavaScript and working on Node.js is ideally suited for the programming and training of android robots, and representation of virtual worlds.

You may open the console and type solj or solp or solc to view the options. 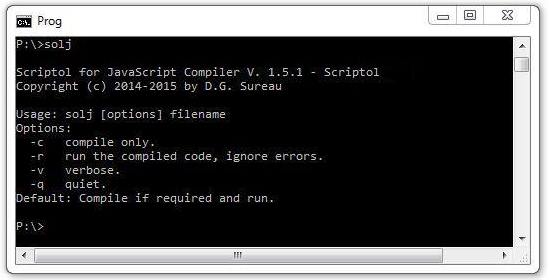 Using scriptol in a console

You can also configure a code editor to launch scriptol programs.

Choices of Scriptol that have been replicated in newer languages

Many innovations or choices of Scriptol has been taken over by newer languages​​, which so help to ease programming.

The Scriptol to C++ compiler is under the Mozilla 1.1 licence.
The interpreter and compilers provided on scriptol.com and scriptol.fr are free even for building commercial programs. Anyone may write a compiler for the langage.