List of tools for making applications with an HTML 5 interface. 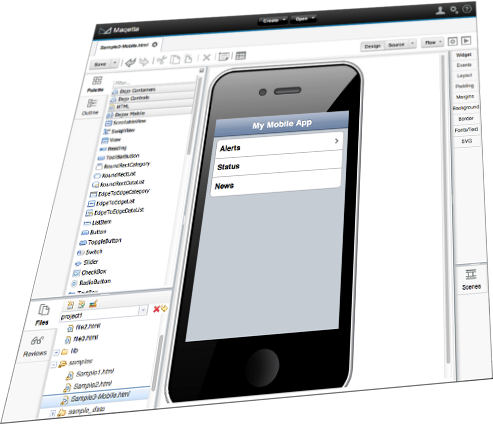 Of course , any text editor allows you to write HTML 5 code. What would be interesting is the WYSIWYG feature like as in Dreamweaver 5 with HTML 5 Pack, which is far from free. But many alternatives exist.

Ace editor is not a final tool to install, but rather a library to make an HTML 5 editor operating as independent software or as a plugin. Ace is used by the JavaScript edition of Advanced Explorer with a custom visual interface. The project, however, is less well maintained that CodeMirror, which is becoming the reference for building an editor.

The version 7 of NetBeans, an IDE for Java, C++ and PHP, now includes HTML 5 document editing. Conventional EDI tend to add HTML 5 and JavaScript in the list of supported languages​​, while new tools like LightTable are dedicated specifically to writing software in JavaScript or other dynamic languages​​. It allows to edit JavaScript code while a program is running!

IBM launched a project development environment dedicated to HTML 5, Maqetta (image on the right) as it had previously launched the Eclipse project. It is a leading software to visually build HTML interfaces, targeting either the desktop or mobile. In this case it is displayed on a virtual mobile. It has since been abandoned by IBM but the editor is still online.

One of the reasons of IBM disinterest is probably the emergence of many other alternative development environments for this platform. Among these, is included the Intel XDK. Its advantage is the ability to generate, from a same, source applications for different environments, on the desktop or on mobile devices.

Construct 2, the software from Scirra allows to design a game by dragging and dropping using the features of HTML 5.
The concept seems attractive, but it has flaws. There are pauses during the game because of the garbage collector to purge the memory for example. The sound is bad. Hopefully future versions of browsers will make this type of game more playable. Hardware acceleration must be enabled on browsers to get fluidity of display.

HTML 5 test allows to check online your browser compatibility with each HTML 5 feature.

The list of forms on this site allows also to visually verify which HTML 5 tags are supported by the browser on you can verify the support of attributes too.

Wallaby converts Flash files into HTML. This converter is supplied by the creator of Flash, Adobe.

Swiffy. Offered by Google, online tool to convert SWF file into HTML 5, SVG and CSS 3, and so get rid of the Flash player.

Gumbo. By Google again, an HTML 5 parser, written in C, and tolerant to bad inputs. The firm says it has been tested on two and a half billion pages through the search engine index. There is another parser, Hubbub, which works in SAX mode (reading and parsing each element) while Gumbo operates in tree mode, slower but simpler. Of course the latter had more tests.