In the continuity of the Chrome browser, Google launched the Chrome OS, an operating system, which at first, is intended for netBook.

The first computers running under this operating system, the Chromebooks, are available since June 15, 2011. 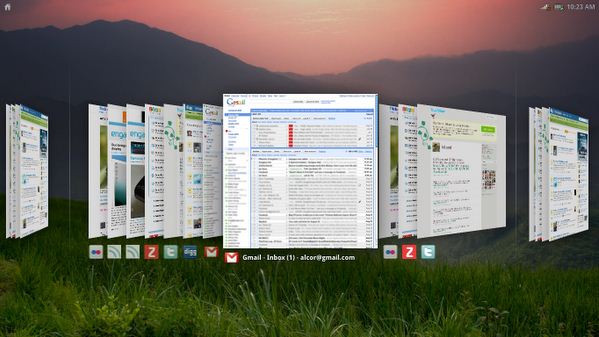 It can also be used on desktops, but is aimed at Web users mainly.
According to Eric Schmidt, the CEO of Google, Chrome is an anti-OS (seems to have evolved with the Aura Manager). He does not hide that the purpose of the OS is to help to increase the audience on Internet. Data are saved on the Web. The ideal user seems to be the Facebook or Google+ user  that puts its documents and photos in the cloud and does not know what is a file system.

It starts in seven seconds and is free. The system runs on the Intel or AMD x86 and ARM processors.

Chrome OS is a different system

Google wants to totally change the design of operating systems. Currently they are a source of problems for the user:

The design of Chrome and the use of Web applications want to free the user of this. To speed up the system, it is entirely memory resident which eliminates disk access, the main source of slowness.

This is a Linux system with a new windowed graphical user interface. It will be immune to virures and easy to update.

Applications to be developed in this environment with traditional Web development tools, should work on all browsers. They also works on Windows, Linux and Mac. Through a system called chromoting, it can execute local applications in the browser both on the same computer on a remote computer. 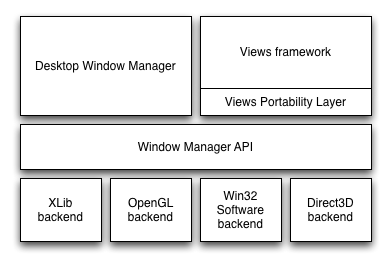 The new OS is designed from scratch, as was the browser, whose the interface as you can see is different and sleek.
The system is oriented towards the following: speed, simplicity and security. It is designed to be lightweight, which confers it speed.
This is also true for the browser. It has a protection against viruses mainly with a runtime environment for each page. It will be the same for the OS, each application is encaspulated.

The first interface was minimal, applications will run mainly in the browser, so programs developped under Chrome OS will run on other operating systems. The desktop is made of tabs, one for each Web application and only Web apps will run on it. But with the Aura manager, it becomes similar to a desktop Linux. 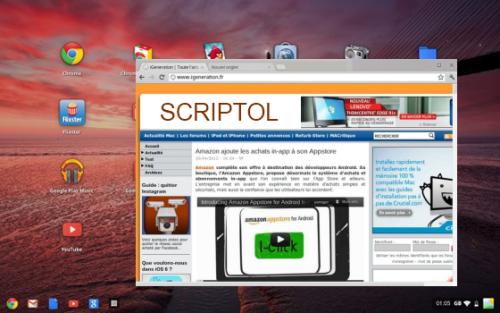 This window manager is to Chrome OS what Metro is to Windows 8, an interface that makes the system simple and pleasant to use. But it looks more like a traditional desktop with an icon bar at the bottom to commonly used applications like Gmail, and on the right a set of indicators.
Applications are represented by icons on the desktop ahead a wallpaper. It is actually surprising that Windows 8 adopts an interface for tablets while Chrome OS designed for lightweight laptops adopts a desktop PC interface.

A difference with a traditional OS is that Notepad (here called Scratchpad) saves your files in Google Docs and not on the local file system. It is the same for your images processed with Picasa. This simplifies life at the expense of privacy, but is ideal for companies and schools or to reuse documents on his smartphone.

For more infos about Aura, see on the Chromium project. We learn that Aura should also run on Windows, and that it is built on GTK. On Linux, it will please users not happy by the direction taken in KDE 4 or Gnome 3.

Failing to provide drivers for all types of printers on the market, Google designed a solution to allow web applications to print documents: managing the printing on the server.
The document is already available on the server with the online application, the printing management is done by the server, then regardless of the user's hardware, it sends just the content and appropriate instructions for printing to the printer.

New printers will take into account the cloud and will be connected directly to the network to receive the documents to print. For existing printers, a special software will be provided to connect them.
In all cases, the link with the network can go through the computer and the USB port.

Chrome OS and other systems

Chrome OS challenges Moblin from Intel, that is based on Linux too, and Windows CE or Seven.

Android was designed for mobile phones and may eventually operate on netBook, but manufacturers deem it insufficient for them.
But for the mobile, more and more manufacturers are adopting it.
Android is a Java software while Chrome OS is Linux with a simple GUI. Android has a touchscreen interface suitable for mobiles, while desktop computers require a keyboard and a mouse. Therefore the future merger of the two OS requires a unified interface.

Chrome OS seems a good idea to offer an alternative to Windows. Chrome is in constant development and new direction that designers want to take is to separate the graphical interface which includes windows, and the backend. The latter can then be XLib, OpenGL or DirectX and Win32, that is, Linux or Windows ...
So a universal interface running on any computer.

Chrome OS is really just a browser on top of Linux and you do not need a special OS for that. You may use alternatives like KDE Plasma, or Firefox OS which has the advantage of promoting standard APIs to program the hardware. So if your access account is disabled or if you no longer want to pay for online storage that ceases to be free after two years, you can still install Linux.

But by 2018, ChromeOS has expanded with the ability to run Linux tools in a virtual machine, in a separate environment, and to run development tools like CLang and also use IDEs like KDevelop.

What future for Chrome OS?

Smartphones and tablets are expected to take a large market share at the expense of computers and especially of netbooks. But the latter is a better productivity tool, it has indeed replaced the Apple tablet in schools.

On the professional market the system is provided by subscription and serves as a terminal. It competes with Microsoft's offers of same prices. And also with Linux that can provide the same service, coupled with a browser, even more again since it gained ability to run Linux tools in 2018.

In January 2013, the best-selling laptop on Amazon U.S. is Samsung Chromebook sold $ 249. In February 2013, HP announced the first Chromebook with 14-inch screen (sold $330), so closer to a laptop than a notebook.
2013 was the year of the ChromeOS. The percentage of sales of Chromebooks in the U.S. among all computers and tablets, has increased from 1% in 2012 to 10% in 2013 and 21% of notebooks. This worries Microsoft specially since 20% fewer notebooks under Windows has been sold ! As usual when it feels threatened by Google, the firm launched a video to devalue chromebooks on the site Scroogled.

Comments about the new operating system...

"The more vague they are, the more interesting it is." (Ref).

"We benefit when people spend more of their life online. So for us it’s a very straightforward strategic initiative that ultimately results in more revenue."
(Source interview for Wall Street Journal). 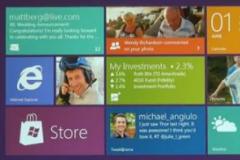