With Windows 8, and more again Windows 10, Microsoft wants to promote a single platform for desktop and mobile.

Modern UI is a touch interface giving access to standard applications or other services such as videos, weather service, etc. ... which replaces the screen with icons.
Tiles have notification, they show always the current state of the application they represent.

It seems that all applications can run both by touch or with the mouse or keyboard, and the start interface, as seen above is composed of tiles like on Windows phone, and is built in HTML 5 and JavaScript.
New applications for Windows 8 may have an interface built in HTML. These apps will be online or connected to the Web, but with full access to local resources. Official said:

We are clearly influenced by the mobile phones.

Microsoft has designed a weapon to thwart Google Chrome OS and Meego which appear on netbooks. They have a market share because they are free, but most users prefer to the former a system that can run local applications (as are mobile phone applications).

The name Metro was first choosen because the UI was inspired by signs commonly found at public transport systems. However, beacause this is already a brand name, the name was officially abandoned by Microsoft which speaks now of Modern UI. We can simplify in MUI.

In May 2015, Microsoft announced it removed the Modern UI version of its Skype application in favor of the desktop version. So it seems that this interface is not designed to replace the classic platform!

What are immersive applications?

The word keeps coming up in the blog posts dedicated to Windows 8 (see links). What is an immersive application?
This means that the interface of the application  disappears completely in favor of the useful part, text or images needed by the user.
In a typical application, the content fits into a frame with buttons, menu bars etc ... All this becomes invisible or becomes instruments similar to real objects with which the user interacts.

The Modern UI interface and HTML 5 programming will be for immersive applications. Typical applications will keep their interface on Windows desktop.
Applications in the immersive interface Modern UI can be coded in HTML 5 or any native language or with XAML and the Jupiter interface. Modern UI has a special browser which do not support any plugins.
These Modern UI applications are the only  that run on PCs and tablets. They will be very easy to make and will be synchronized with  online services.
In the long term they are intended replace conventional native applications.

To resolve the conflict between the interface with Modern UI made ​​for immersive applications on PC or tablets, and other common applications that users will not want to give up, Windows 8 offers two independent interfaces.

The interface will adapt to whatever is the current task. Icons in relation to the latter will appear in each user action.
For graphics, Aero Lite is a light version of Aero for limited configurations, based on Modern UI.
Windows Desktop works also on a tablet. So a tablet connected to a keyboard and a video monitor, is a perfect replacement for a cumbersone PC. 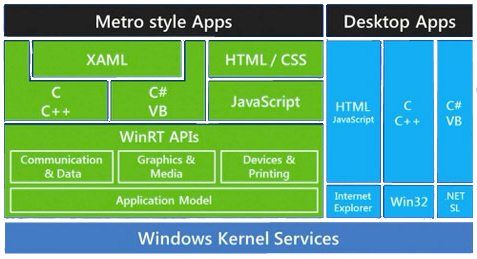 For developers, it is also the end of the free distribution.
Microsoft is clear on this point, it is not possible for any programmer to distribute software running on this interface, as was the case up on Windows and as is always the case on Linux, and on mobiles (next to the AppStore and other stores).

All applications must be downloaded from the Windows Store. To put his application, a developer must have a license and each application it makes must go through a certification process. Then the shop will retaint 30% of revenues of the software. This explains why there are so few developers for the platform to date.

Moreover, movements of resistance are emerging to avoid going through this taxation imposed. This is the case of SteamOS a Linux version designed for games, which was so far the prerogative of Windows. Manufacturers also want to install Android in a virtual machine for immersive applications to be freed from constraints of Microsoft. And in fact, any developer can create that interface for immersive applications, such as for example Tiloid created by .... Scriptol!

Native Client allows to use native code in the browser, and WebGL is an interface to the 3D API of the système in the browser, it is clear that the opportunity to free completely from Windows becomes realistic for most users.

In fact,  game publishers are beginning to implement NaCl versions. And game is the main selling point of Microsoft to personal users, compatibility with Windows makes this system indispensable. This dependency will cease with NaCl as Chrome can run on Windows or other systems.

The Modern UI interface which consists of HTML 5  + native API can be replaced by Chrome + NaCl + WebGL. Remains the XAML Interface for more professional applications.

Asm.js is a small and very fast version of JavaScript, implemented in the Firefox browser. It allows you to run all types of applications and make them totally portable. That might work in Modern UI, but it will hardly take place in the project of Microsoft, for whom portability to other OS is not the priority.

Nothing prevents to create a tile interface in an HTML page and use it to launch Asm.js applications. 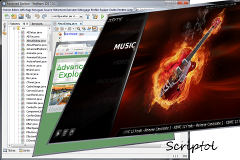