While the creators of the Arduino fight for the ownership of the brand name, Broadcom has revolutionized the field of micro-controller with the Pi Zero, a motherboard with the capabilities of a computer, but also with 40 GPIO slot to control electronic components. This at a price that is a fith of that of the Arduino Uno!

The Pi Zero has yet capacities greater than that of a desktop computer in 2000. As for example the Gateway Select 1000, the first to be equipped with a 1 GHz processor ... 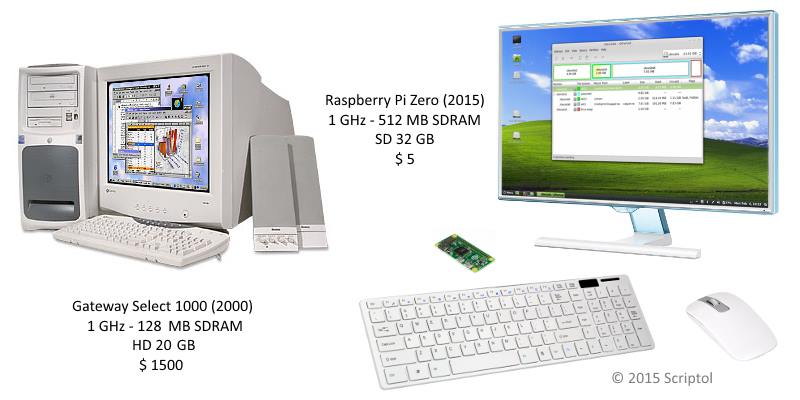 The Zero will probably not be used as a desktop but as robotics controller or for the home. So it is also useful to compare it to the most popular product in the field, the Arduino Uno.

Comparison of the Pi Zero and the Arduino Uno:

The Pi has no analog ports such as the Uno but we can connect analog components if they are equipped with a SDI or I2C interface. You can also add an ADC (Analog to Digital Converter) expansion card.
Consumption can also be reduced as explained below.

Let's start with the installation of the operating system, Raspbian or Linux IoT. As explained on the website raspberry.org, the system is copied to an SD card and Pi Zero is ready to start as soon as you insert the SD card into the slot.
Then install Node.js to have a JavaScript interpreter. The 10 megabyte package easily held in the 512 MB memory of Zero!
If you want to use the Zero as a controller, the first thing to do is to reduce consumption, especially if it is to operate with a battery. You can divide it by two and put it at the Arduino level, in idle mode, by disabling components unnecessary for a controller: indicator light, HDMI connector.

The o off. -p We would if we wanted to activate.

Turn off the indicator light: in /boot/config.txt add these two lines:

As shown on the picture below, the zero has a SDXC slot, HDMI output, two micro-B USB OTG and 40 GPIO. No Ethernet slot, so you have to communicate otherwise with the device.

You will probably need the following components to connect the Zero to the outside world:

You will get inspiration from the list of electronics components to find those required to first experiments.