Commercial products and software that inspired Apple. Not always with the consent of their creators.

Apple's lawyers are working in one way: they spend their time trying to find copies of Apple products, but never search if Apple's products are copy of others ... 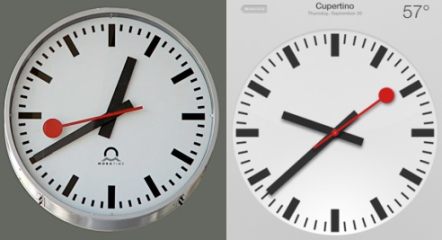 It was designed by Hans Hilfiker for the Swiss railway stations. It is an object whose design is deposited and held by the rail service in this country, the SBB. This design is found in the clock application for the iPad without the copyright holder has been consulted. It is a form of skeuomorphism (virtual reproduction of real object) pushed to the extreme. Maybe a little too much and the SBB says it contacted Apple to provide a solution to this dispute, legally and financially. Finally Apple agreed to pay $21 million to settle the dispute. 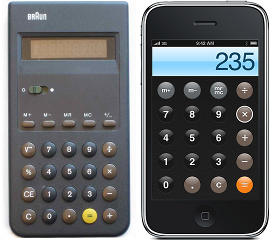 The calculator on the left is Braun ET 44, a former model but the design is pleasing to Apple and when Apple likes something, it takes it. We know Ive, the principal designer at Apple admires Braun a lot and many Apple products are inspired by those of this company. The iPod, for example is like the T3 pocket radio from Braun. But Apple fans will tell you that they are not copies, they are homages. This is not the same.

Braun has always been a constant source of inspiration for Apple's design as shown in this video. 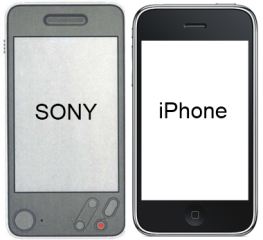 On the left a prototype designed by a Japanese designer working at Apple, inspired by Sony products. At right, the iPhone. The initial project was like the Apple's iPod, a design similar to that of Nokia, but with less useful surface than the Sony model, which is why the Sony was finally preferred.
In the trial that pitted Apple to Samsung in San Jose, Apple got the Sony prototype is not mentioned because it was not submitted in a timely manner and Samsung was sentenced for copying the design of the iPhone.

The design of the iPhone is also very close to that of the LG Lada which was presented at the iF Design Award and won the award in September 2006, before the iPhone was announced in January 2007.

Apple often makes designers pay tribute to other companies, but hate that other pay homage to its own products. In particular, the AppStore is used to reject an application when a graphic is too much like its own designs.