What applications for a mobile?

Many services and Web applications are also available as an application for a model of smartphone to take advantage of the touch screen.
There are also games that turn it into game console. They may be similar to 3D games on computers 10 years ago. In 2000, we often had a resolution of 800x600 pixels on a 15 inches CRT scree, which corresponds to the resolution of smartphones.
And there are number of applications that could run on a computer, but are not usable on it because they must start immediately and anywhere.

Here are some example of the amazing possibilities of current smartphones. 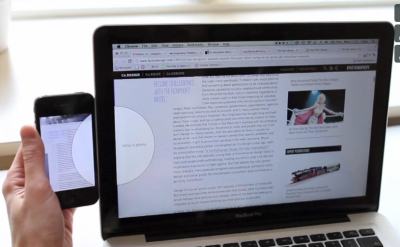 And some examples of applications taking full advantage of these capabilities...

Taking advantage of GPS, finding a restaurant or any service can direct you on what is nearby.

Again with the GPS and also using the built-in compass and of course the camera, you can display information superimposed on places to which you point a smartphone.
It serves as a tour guide.

You can also combine augmented reality and the search and show superimposed on the image taken by the camera, a message showing what you are looking for.

Some ISPs offer an API that can turn a mobile into a remote control, simpler to use than that supplied with the box of the operator.
We can thus choose the channel, controlling a recording and performing actions impossible with standard devices.

In other words, the control center for home appliances, including lamps. Android@home is an application for Android that automatically manages your home. Lighting controls as needed, for example. Applications depend on developers.

By placing the mobile on the bed when sleeping, the latter thanks to the accelerometer can detect your position and deduce in what phase of sleep you are. He does not wake you up if you are in deep sleep, but wait until you're out to sound the alarm.

Allows by pointing the phone to the sky to see the position, speed and weight of the closest plane.
Also it displays the flight number, the airport of departure and destination.
To do this the application uses the ADS-B system that planes now have to transmits a signal containing the data.

In a foreign country, aim the camera on a poster, a restaurant menu written in an unknown language, and it will be translated into the language of your choice.

Accoustic Ruler is an application ables to determine the distance between a point and the device (up to 25 meters), using the loudspeaker to emit a sound, the microphone to receive the echo, and calculating the time between the two. It uses the ambient temperature as an adjustable parameter...

A free application gives us the name of a tree from a photo of a leave with a visual recognition software. It was developed by Columbia and Maryland Universities with the Smithsonian Institute.
The database is rather local for now. See Leafsnap. 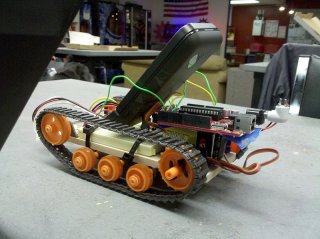 Using a mobile to control a robot, is the specialty of Cellbots. This site provides software for controlling various devices that provide a "body" to a phone and expand its capabilities. In fact, the mobile can now be part of a robot, it becomes its brain and its control center. The right picture is an example of a robot tank that can interact with the environment via a webcam and processing capabilities of the mobile. 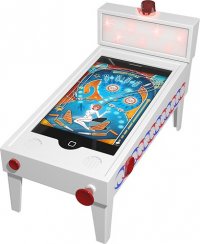 It is an accessory and a software. For 40 dollars, you have a miniature pinball, interfaced with the program and using the screen of the smartphone to show the track of the ball, with its flashing bumpers. (On BestBuy).

As shown in this video, with Wi-Fi and a mobile phone, it is possible to control a flying machine, in this case a helicopter, getting images with a camera and combination with augmented reality, flying in a semi-artificial universe.
The French Parrot company offered this demo.

With a sensor connected to the mobile, it is possible, for example, test his blood sugar. 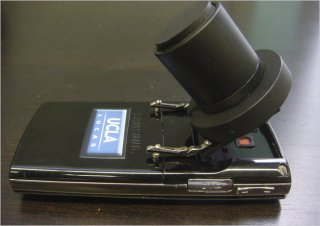 This invention has won three awards including that of the National Science Foundation, for a total of $510,000.

By connecting this mini microscope that costs almost nothing to a mobile phone, it is possible to have a mobile laboratory replacing very expensive apparatus!
The device placed on a drop of blood can send the image to a remote laboratory that will analyze it in real time.
This microscope has no lenses, the magnification is obtained by LEDs that cross the sample while the image is captured by the camera of the mobile. In fact we obtain a hologram can allows to reconstruct an image by computer processing, that can be automatic, the remote site returning a diagnosis from a compison with its database.
It can be used by anyone without special training.

See the website of UCLA and Lab on a chip.

This application developed by a group of seismologists in California uses the accelerometer coupled to the GPS as earthquake detector. It is capable of indicating the location of the origin of the earthquake. The mobile then serve as warning system: they warn in advance of the inpending of the earthquake and can also warn of a tsunami.

The Runware company offers a software  which interfaces with a sensor, generally suited to a hip belt, to show more comfortably the heart rate. It comes with an accessory to recover the signal from the belt.
In addition to visibility, the mobile can compile statistics and make intelligent treatment by combining the heart rate  with geographical and field data.

Robinhood is a tool to buy and sell shares on the stock exchange without paying any fees. This works internationally. On Android and iOS but for US residents only.