In this second part we will see the choices made by actors and their experience. 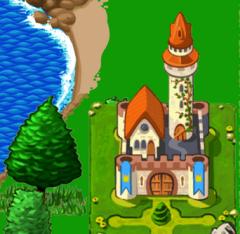 The Wooga publisher made ​​an HTML version of its game Pocket Island (picture right) which already existed in native on IOS. He stopped marketing the HTML version 5 and put it as open source on Github. The reason is because little income. Users found it slow and preferred to spend the native version if any one on their device.
However it should be noted that this is an online game on Facebook, thus requiring that the application is loaded for each use (it is partly but not completely offline). By making a local application in HTML 5 we would remove the loading time.

In contrast to what happened to Wooga, the realization of the game X-Type by Phobos Lab, even though it has encountered difficulties to build it, gives a quite amazing result. The game itself looks like what was found on the Apple II, like all mobile games actually (starting with Angry Birds), but the fluidity is optimal and the sound perfectly synchronized.

Facebook chosen HTML 5 for its iOS application, providing direct access to the site on a mobile without using the browser. But the loading time was prohibitive and users were complaining. Facebook decided to create a native application. It always uses HTML but only for the interface, the backend is in Objective C and it's very fast. This is actually a local HTML 5 app as described in the JavaScript section of this site.

In conclusion, if the number of users is very high or if the application needs for all system resources, making a native version seems to be obvious, but the future could be different: more efficient appliances, faster networks, better frameworks, should give the advantage to HTML 5, which is totally portable.