Several successive inventions have been necessary before computer become possible...

Let start with a definition of a computer:

An electronic device which is capable of receiving information (data) in a particular form and of performing a sequence of operations in accordance with a predetermined but variable set of procedural instructions (program) to produce a result in the form of information or signals. (Oxford Dictionary)

The clock. Bolter credits the invention of the weight-driven clock as the key invention of Europe in the Middle ages, in particular the verge escapement that provides us with the tick and tock of a mechanical clock. This led immediately to mechanical automata beginning in the thirteenth century.

The telegraph, (mid-1800) is the precursor of the telephone.

Electromechanical relays (1935). With its two "binary states" open and closed.

Digital, binary adding device (1937) by George Stibitz based after relays.

Claude Shannon in a thesis at MIT shows how to implement Boolean algebra using electronic relays and switches (1937).

Integrated circuit. Starts the third generation of computers in 1960s.

The Antikythera mechanism. Built in 87 BC, this computer was able to predict the astronomical positions. A functional replica was built today (video).

Model K, by Georges Stiblitz was a relay-based computer (1937).

Z series by Konrad Zuse. Z1 in 1936. It used several rooms of the house of his parents.

Harvard Mark I (1939). By IBM, decimal arithmetic as Babbage's engine. 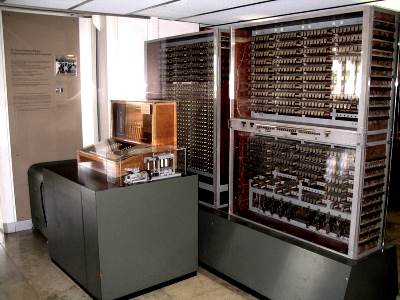 ENIAC (1945). Electronic Numerical Integrator and Computer. A digital computer, by the university of Pennsylvania. Turing-complete.

EDSAC (1949). By University of Cambridge. First to implement the Von Neuman architecture. Program and data are in a same store.

Ferranti Mark I (1951). University of Manchester. 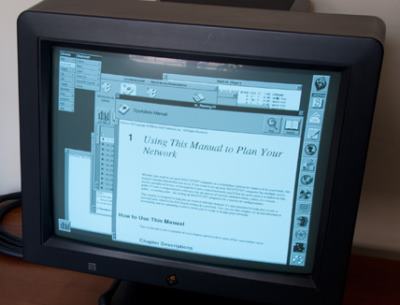 They become popular in 1977 with Apple II, TRS-80 and commodore Pet.

The IBM PC in 1981 launched the success of micro-computer for business.

The second commercial computer with GUI, after the failure of the Lisa in 1983, the Macintosh appears in January 1984. It is imitated by the Atari ST and Amiga in 1985, with color screens.

The NeXT Cube was far ahead of its time. and the NeXTStep operating system will become that of Apple with the return of Steve Jobs in 1997. In 1988, the interface already has the sidebar icons which will come on Ubuntu over 20 years later!

In 1994 devices combine the possibilities of phonie and those of a personal assistant. With an operating system, they are miniature mobile computer. The term smartphone appears in 1997.

In 2008, the iPhone popularized the smartphone to the masses: the mobile phone can run applications, it is a computer.

In 2010, tablets are becoming popular thanks to the iPad, another idea of ​​Steve Jobs. This is the beginning of the slow decline of the desktop for individuals. However tablets are a tool for consumption and does not replace entirely the desktop which is a production tool.

Evolution of the size of desktop computers from 1981 to 2014 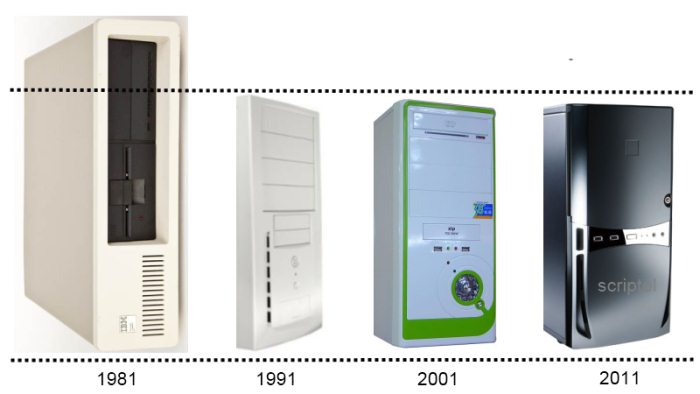 According to the results achieved with this Linpack benchmark, in 2011 the speed of the Top 10 smartphones is over 200 megaFLOPS.
According to these benchmarks for desktop computers, this is equivalent to a computer with a 2 Ghz Pentium 4 in 2006. 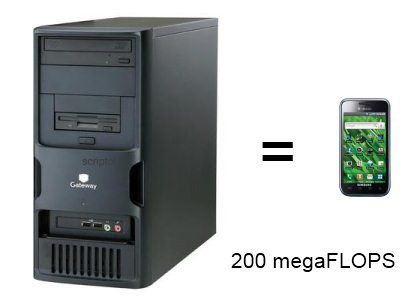 Modern smartphone that is held in the hand has the same power as a Gateway E 2500 from 2006 powered by a Pentium 4.
The Tegra 3 from NVidia is a five cores processor offering performances similar to that of PCs. It is claimed to reach 300 megaFLOPS. Actually it integrates a 12 cores GPU ables to run 3D games.

We can say that there is such a blockage in the evolution of the size of computers. However, there was an attempt by Intel with Nuc to reduce the size of the PC and it turns out that this is the only type of desktop computer whose sales are up in 2014.