From the simplest to more complex ones...

Starting from a raster image that is made of large squares, we arrive at a clearer picture, as if one could a posteriori change the definition of the screen on which it was drawn ...

This can be very useful if one wants to convert an old game on a modern platform such as Canvas or a smartphone.

Color a black and white image

This technique is so well controlled that we can now see in color old black and white films.

It is explained in an article, Colorization Using Optimization giving several examples.

A tool on GitHub allows also to color a sketch, with another image as color sample: Style2Paint.

Restore a picture or make a HDR

Wisely by removing the "noise", ie the image defects such as dots and stripes, and it needs to know to interpret that, the algorithm gives life to a cliche damaged or washed out.

It is implemented in a plugin for Gimp, G'Mic. It can also automatically make HDR, ie increase the brightness of light areas and darken the dark parts.

Turn a photo into drawing 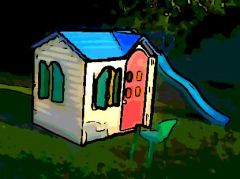 This algorithm is implemented in G'Mic too.

Used from the command line, G'Mic allows many changes examples of which can be seen in the G'Mic gallery.

Intelligent algorithm to resize images maintaining the appearance of objects within it. It is actually implemented in the resizing functions of the main graphical utilities like Gimp with the Liquid Rescale plugin, ImageMagick with the -liquid-rescale option.

It reached the highest level. From a rough outline of the object to remove on an image, and this may be a person like everything else, the algorithm is able to identify itself the object in question, to define its exact boundaries, to extrapolate what would be the background if the object had not been present, and restore the background all that without any human intervention.

This algorithm is available both as a Gimp plugin to install or in Photoshop.

By drawing a sketch and then combining objects drawn in a simplistic way to photos, it manages to produce a new image that incorporates natural objects as though they were photographed.

This algorithm is implemented in the software Sketch To Photo. From the article, you can download the command line program. 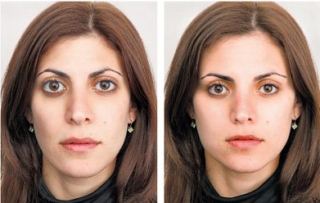 There is no written rule to define whether a face is beautiful or if it is not, then the creators followed the principle that what is more closer to the common is better.
You judge yourselves t by comparing the two versions of the same face on the photo, with the original face at left and at right as amended by the computer.
The algorithm has an augmented reality application, in conjunction with a technology that combines a camera with glasses to project an image of a modified reality on the glasses.