With Internet Explorer 10, Microsoft wants to develop further support for HTML 5 and CSS 3 and allow to make immersive apps.

To speed up the browser and provide access to Windows functions, Microsoft has removed all the intermediate layers between applications in IE 10, and the base system, providing direct access to the functions thereof.
A Web application works as a Windows application.
Critics say that the term is rather superficial, all the current browser using material acceleration having similar capacities.

Internet Explorer is also a component of Windows 8 for immersive applications. 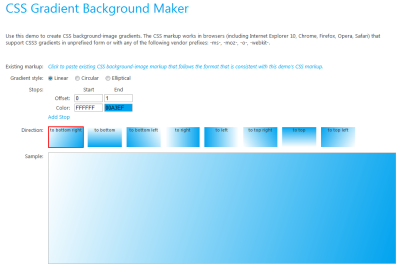 A tool to make gradients

In CSS, shadows are now supported to create widgets similar to the native components of mobile phone systems.

3D transforms and transitions are added too.
Inspired by the Mozilla XUL interface language, flexbox is a tag for a flexible layout allowing dynamically display of content depending on the size of the screen, on the desktop or on a mobile device.

The float properry may be positionned inside the page now and not only at left or at right.