Android, the future of programming?

Mobile are becoming small computers and developing an application to them can bring as much and often more than conventional computers.

Applications for the iPhone can generate millions of dollars. Webmasters and programmers should look at the platform as a possible major audience in the future. The Nexus One video shows they have nothing to envy to graphics of computers.

"If Google did not act, we faced a Draconian future where one man, one company, one device, one carrier would be our only choice. That's a future we don't want."

Said the company at the presentation of Android 2.2. And a picture reading 1984 was displayed.
Yet the Macintosh was launched with an advertising campaign on the same theme, the movie 1984. The world is evolving!

In response to rumors about the Google Phone Bill Gates in an interview with the New York Time said:

"And to be able to say that there's some challenge for us in the phone market when its becoming software intensive, I don't see that."

Who said that Bill Gates is a visionary?

Android and its evolution

Eric Schmidt, CEO of Google said at the Mobile World Congress that 60 000 android phones are sold per day (Nexus One or other products).
The operating system of Google is the main challenger of the iPhone and its release leads to the ire of Steve Jobs.
Based on the same type of touch interface it makes use of a mobile quick and intruitive . The number of applications will not long to reach that of the iPhone, which is encouraged by the contests organized by Google.

Android 3 allowed a resolution of 1280x760 which is actually that of a 22 inch screen! Manufacturers will no longer need to add supplements to the user interface that is consolidated, improved and expanded.
Video of Nexus One under Android.

In Android 4, each aspect of the OS has been improved in this version. It is possible to update from Android 2 or 3, providing the hardware can support it.
Amoung new features, resizable widgets that can hold full applications.

Over time the system has evolved as to the interface and its functions and backend. The Dalvik virtual machine has been replaced by a compiler to accelerate the applications, and Java is now only one language among others to make them.

The cell phone running Google’s Android operating system has been officially announced January 5, 2010. This is the first hardware sold by Google, but it will be followed by others, including an electronic tablet, currently in development.
Initially it was distributed to Google employees, prior to come to public sale and Google has put this video on Youtube.

The selling price will is at around 500 US dollars  with a promotional price  possible in association with the T-Mobile telephone provider for 80 US$ per month.

It is a very thin and lightweight device, manufactured by HTC, which already produces an Android mobile.

Nexus One vs. iPhone

Both devices have similar characteristics. iPhone starts with 8GB memory  while Nexus has a bigger screen and better camera. The two mobiles supports 3G through the operator, T-Mobile for the USA.
You can use voice to fill each fields with Nexus One.

Microsoft criticizes Google’s strategy... and launches its own mobile! 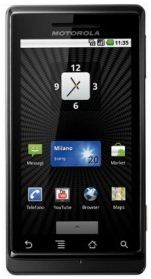 The fact that Google sells its own mobile will it disappoint other manufacturers and encourage them not to use the Android operating system?
It seems that on the contrary, according to the latest statistics available, it is the opposite effect that occurs. For example, shares of Motorola  Droid rose from 1% to 13% in December 2010.

The total number of smartphone buyers who intend to use Android in December rose from 6% to 21%.
In retrospect, in February 2010, we see that more and more manufacturers have announced models of mobiles under Android, so it seems that Google while offering its own, has shown that we can compete with users of its software successfully (for the software).

Microsoft, which sells hardware, actually the XBox game console, but that does not compete with products using its software, said that Google’s strategy is wrong.

Robbie Bach, president of the entertainment and devices division, said that other manufacturers will be reluctant to use the Android platform for fear that Google takes less into account their interests.

Doing what they do, selling both software and hardware is very, very difficult. Google sends a signal about where they will put their future engagement.

On April 12, 2010, Microsoft launched its own smartphone, the Kin that has two functions for social networks and a full keyboard. It is powered by a modified version of Windows Mobile 7.

Microsoft also sells since 2006 a digital music player to rival iPod, the Zune, which can connect to the Internet via a Wi-Fi connection and can watch videos. The operating system is derived from Windows CE.

On August 15, 2011, Larry Page, CEO, announces the acquisition of Motorola's mobile division by Google for $ 12.5 billion.

Thus, Google is also making itself mobile builder, or rather designer as firms now, like Apple, let manufacturing in the East the products they design.
But the main purpose, which was mentioned in the announcement Supercharging Android with Motorola is to have the numerous patents owned by Motorola (24500 on January 2011), an old actor in the field.
Google will be able to take action against companies like Apple and Microsoft which make trials for patent infringement (more or less artificial) to discourage the adoption of Android by manufacturers: it will be able to attack them too ...
Android's future seems assured with this action. It will remain free and open, it is in the Google's announcement. And CEO of Sony and HTC welcome the agreement.
Motorola was saved by Android boosting sales of mobile phones by the manufacturer, it seems that the opposite becomes true.

Many are skeptical that Google can continue to provide Android to manufacturers now its competitors without being tempted to promote his own business.
In fact, Google needs an ecosystem of applications for remaining Android interesting to users. So he needs other manufacturers, unless its own products become so popular that it takes a large share of the market, which is unlikely.

Apple sued HTC, saying that his phones violate patents it has filed. This is seen by all analysts as an attack against Android. A first step before tackling other Android users or Google itself.
Jonathan Swchartz (former CEO of Sun) relates that when Apple or Microsoft companies threatened a lawsuit, he always found in the portfolio of Sun patents that their competitors had also violated and that was enough to end the dispute.

Microsoft: We have patents that cover your free OpenOffice suite. But if you pay us royalties on every copy sold, we'll not sue you.

Sun: We’ve looked at .NET, and you’re trampling all over a huge number of Java patents, but if you pay us royalties on every copy of Windows sold, we'll not sue you.