From Google Maps to Street View

Google has given life to many websites with its Google Maps, but they are now useless since MyMaps is here. Why is this technology so important?

In December 2011, MyMaps is replaced by MapMaker with a simplified interface. It is a set of tools to create your own maps. Intuitively with the mouse, you can draw a road and place photos or videos. You may also adds links to descriptive web pages.
The map created can be integrated into the Google Earth service which is the public displays of maps available to Google (see bottom of page). It could also be placed on a Web site service provided so far by Google Maps.
You can use TileMill too (see links at bottom).

Google Maps is the most popular application of the Web 2.0 to create a mashup, a combination of functions in order to create a new service.

They may have the following elements: landmarks, lines, forms completed by a descriptive HTML text or not, photos and videos.
The design is done with an online tool that looks like a vector drawing software. A new card is created by giving a title and description, then buttons are used to place an online form, a picture, and so on. One may subsequently selects elements to edit, move.
You also have a manager to manage the cards that you have created.
Photos and videos must be stored on-line to be usable. This can be done with Picasa. They are associated with a landmark placed on the map. 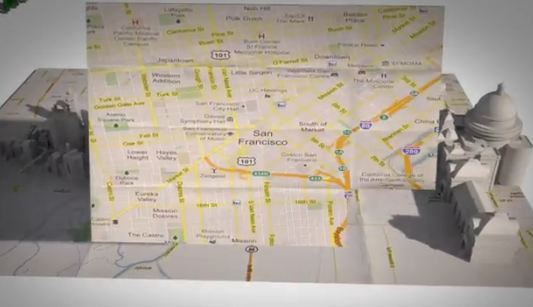 A wiki of cartography

The map is available on the space provided by Google, it is enough to provide the URL to share it with others. It is possible to define your manager with different authorization levels, public or private, on the map. The public maps are taken into account by search engines, private maps are viewed only by those who know the URL.
At first glance, maps created are not included in the public version of Google Earth. They can be included on your version of the software installed on your computer, for your personal use. And of course, they are displayed individually on the Web.

So Google by centralizing the work of Internet users around a single tool is creating a kind of encyclopedia of Geography, or more precisely mapping enriched with photos and geographic texts. Something very better than that Wikipedia proposes!

The Street View function is integrated in Maps and show 360°  3D view of a place. In 3D mode you can move through the streets of a city or a landscape, as long as Google's vehicles passed there ​​with  their cameras. They travel tirelessly all places of the world.  We can thus see the world without moving, Jules Verne would have dreamed of!
Sometimes users are notified of their arrival and put  unusual objects in their path ... 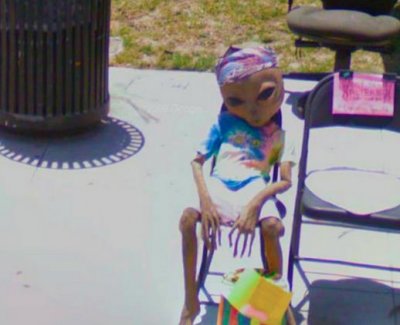