Here how Stephan Wolfram describes the engine (link at bottom):

“What we’re trying to do is take all the things that can be computed about the world…and try and package it to the point where we can just walk up to a web site and have it deliver the knowledge we’d like to have. Like interacting with an expert it will understand what you are talking about, do the computation and present to you results.”

The engine is supplied for free with a paid version that allows to save the data collected and to put ones online.
It is in English only because it uses natural language, which makes translation difficult in other languages.
It is specialized in sciences.

It is based on the Mathematica tool, a software for scientific modeling whose it takes the code and it runs on a network of 10,000 servers.
Requests on Wolfram  is not a list of keywords but questions that the software interprets through its analysis engine of natural language. Search results are not lists of pages as Google but rather direct information, with graphs.
It uses graphics as the core content and so differs significantly from Wikipedia.
A toolbar allows to ask questions to the engine at any time. 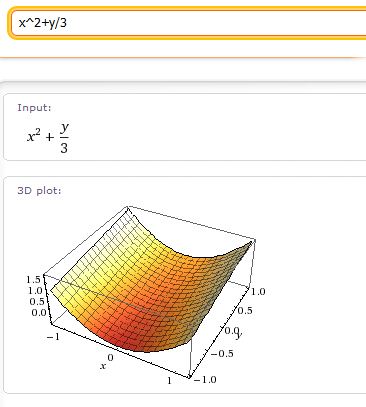 The software at the core of Mathematica and the engine is a set of basic programs, each dealing with some rules, and that put all together, are able to simulate a form of intelligence. The work of Stephen Wolfram have always been based on the principle that complex systems must be designed on the basis of simple elementary units that interact.

The knowledge  engine use data from Matematica and will be competent in these areas:

In a note published on the blog of the site as of August 20, 2009, Stephen Wolfram describes the evolution of the encyclopedic search engine, and discovered that many users are abandoning Wikipedia, who appear willing to participate actively in the project.

Also the site is moving to open to external contributions.

Hundreds of millions of people have already used the engine, which encourages the team to change the code each week, and develop the project in different directions.

The first is the diversification of fields of knowledge. Many are on the lists, the only time they will be realized in the available data on the site.

The second is understanding the issues. Many have no answers when the data is there, simply because the engine of interpretation has not understood.
These questions posed by Internet provide a range of examples in which the engine takes advantage to enrich themselves. There are now 10% fewer questions that can not meet.

User requests, their suggestions, are recorded and reviewed. Of the 54,000 who have been subjected, 36000 have led to corrections.

The team believes that the project, which is growing day after day, is on track to become the largest repository of human knowledge!

An API is also available to create applications using the knowledge base of Wolfram. The first commercial application is sold by the site itself for iPhone. It provides financial information or in other areas, which are structured and involve calculations.

No official reaction from google, but in its annual Founders Letter, David Brin says that:

“I think it will soon be possible to have a search engine that “understands” more of the queries and documents than we do today. Others claim to have accomplished this, and Google’s systems have more smarts behind the curtains than may be apparent from the outside, but the field as a whole is still shy of where I would have expected it to be.”

On November 11, 2009, Microsoft announced the forthcoming integration of Wolfram Alpha into Bing. It is then possible to ask questions and as said in the Bing overview, make decisions, from structured data.
Example with BMI, however a simpler BMI calculation is provided by any diet site.

Wolfram adopts the simplified interface of a search engine with results as a comprehensive page on a topic such as an encyclopaedia. The page is built according to the request and change when the terms are changed.

His semi-commercial aspect may limit its audience but its interest lies in the idea that it brings, it marks progress in knowledge access,
a principle that would encourage more open initiatives.

You can try also this formula:

And also the Batman curve.