These sites offer icons for Web sites or applications, usable for free.

When the download link is not easily accessible, you can download the icons with the right mouse button and the menu command to save the image.
In some cases icons are provided in an exotic format and the image can not be downloaded, you can still use a tool to capture the icon you need.

PSD, SVG, BMP, ICO, ICON files formats are supported by GIMP that can save the images in any format. Xnview can convert a whole directory of PSD, BMP, ICO files.

If you want to make a "flat UI" interface, which has become the norm on mobile devices.

Another solution is to use a font for the icons, what Bootstrap does since version 3. These icons are best suited for image buttons. 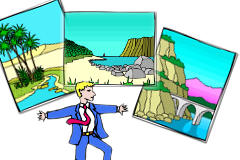 How to find royalty-free images