Free tools to help webmasters to build a website and improve its appearance and ease of use. Content management systems, themes and plugins for CMS are not included in this list.

SVG Edit
HTML 5 editor of SVG images, online or on the desktop. Unlike Inkscape it is very simple to use. The editor does not save directly the vector drawings but instead displays the SVG code to cut and past in a text editor. Among other drawbacks, in the generated SVG code, the attributes are presented in any order, it changes from one vector to another, and a lot of attributes burden the code unnecessarily because they have the default value. Also a bug that the id that is given is not included in the generated code (as of version 2.8.1).

VPaint
Another vector tool but allows to draw interactively. It is still in beta. (Win/Mac/Lin).

Logo Maker (On this site)
To create 3D titles, online tool on this site.
It is also possible to create embossed logos with the Script-Fu menu of Gimp, or like in this page with SVG code inserted into the HTML code. See the XML folder in this site.

Chart tools
These Google's tools build charts from your data you can include on your pages with a JavaScript code. 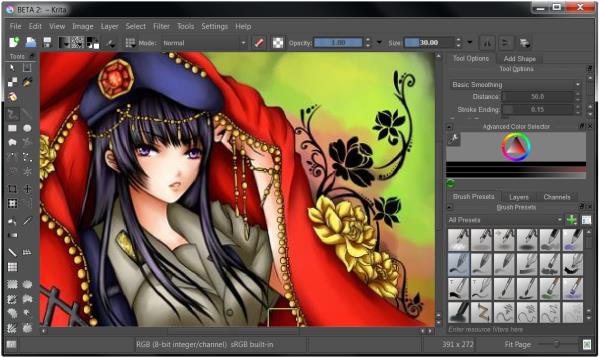 MyPaint, Krita, Paint.NET are designed to replace the easel and the palette. The image at right is a screen capture of Krita.

Free and open source 2D vector animations editor, like Flash. The animations are not made up of frames, but instead transforms object by morphing, or cut-out which is to create objects composed of elements that can be animated individually.
Can import SVG files, and export to SVG, with limitations. Generates also AVI files which can be displayed in the <video> tag.

DevianArt Muro
To paint anywhere, without a trestel, a free online tool built in HTML 5 with basic functions but a lot of filters.

Image processing, does not allow drawing but various improvements on existing photos such as morphological operations.

DarkRoom
Alternative to Lightroom of Photoshop, but for Linux, features to manage a stock of photos and make manipulations in the rendering.

Renderman
From Pixar, rendering tool now free for non commercial use. Revenues such as ads on Youtube do not qualify as commercial.
(Windows, Linux, Mac.)

Clara.io
Completely free alternative to Renderman, but in the browser.

beFunky
A simple way to enrich a web page: Turn photos into drawings with one click (Line artopia effect). To do this you have just to load or share a photo for an instant processing! You can also make a HDR.
Your videos may be converted to cartoons too.

Where to find free images? 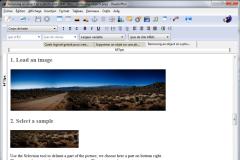