The Model of Applications in Android for Mobiles

Android form Google is an operating system for mobile phones that is based on Linux. The architecture of applications for Android introduces concepts that go beyond the classical models.

This is the model used by the library Swing of Java notably. The view is the interface through which the user interacts with the software. Data are stored separately and can be displayed in different views.
The view may also change the data according to the context, for example, change the text according to the user's language.

Android extends this views/data model, it provides a new model that is suitable for equipment activated at all times. The structure of applications is defined as follows: 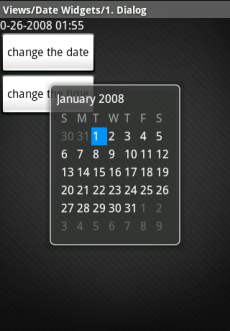 The components of the application:

Besides components, there are also resources that can be XML files, image files as jpeg. They use the android.content.Resources interface and are stored in the res directory.

Components of the application

Each component is included in a list stored in the manifest file AndroidManifest.xml of each application.

An activity corresponds to a screen. If an application is composed of several screens, it has an activity for each screen. Each activity is a class that extends the base class Activity. It has a graphical user interface made of views, and it responds to events. When you change screen, a new activity is launched.
It can return a value. For example, if an activity can choose something, text, image, it returns what is chosen.

The graphical interface of an activity is described by a Layout:
- Full screen.
- Float: dialogue or alert.
- None. In this case it works in background and is invisible. It is maked visible by giving it a layout.

Note that the graphical user interface is described in XML as XUL and XAML.

The intents are the goals of applications and are made effective by a new screen. An intent is made up of an action and data that are URI.
Examples of actions: MAIN, VIEW, EDIT, PICK.
If one wants to see a card about a person, an intent is defined. The action is VIEW and the data is the URI which enables access to this card.
IntentFilters describes how the action should apply.
IntentReceiver is an object that responds to external events. It can operate in the application or it can start an application.

Example of intent, view a webpage: VIEW for action and for data https://www.scriptol.com.

A service is designed to operate independently of the screen, thus of activities. The best example is the music player that can works while moving from one screen to another.

Data stored by a computer program, in the form of files or SQLite databases are private and may not be used by other applications.
But Content Provider may be used to share data among several applications. The interface ContentResolver is the interface that provides data to other objects.

The Android application model offers concepts that go beyond an interface for mobile phones. It is designed for a set of applications that share data, each triggered by the other, running in background or in a view on the screen. It is an interface between the user and the operating system such as robotics, which could run on a laptop or desktop computer.

See also: Android and Nexus One.