The San José trial was a victory for Apple, but foreman's interview are astonishing!

In April 2011, Apple claims 2.5 billion dollars of damage to Samsung. The trial began in July 2012.With the copy of our products, brazenly proclaims the firm, Samsung was able to make huge profits. The choice of a tribunal on the grounds of Apple in a population which lives up new technologes put Apple in a favorable position. 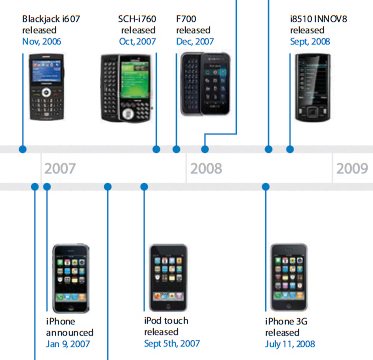 Indeed, Apple, which sold its first iPhone nearly twenty years after Samsung started developing mobile phone technology, could not have sold a single iPhone without the benefit of Samsung‘s patented technology.

Apple asks $ 24 per Samsung mobile for its patents on the rectangle with rounded corners, but denies the right for Samsung to claim more than half a percent of all patents essential to the operation of a mobile that it has since the 90 years! Including patents 7 447 516 and 7 675 941 on 3G which are used by the iPhone.
It seems that Apple believes that the more outrageous it is, the more it is likely to work.

The South Korean firm also claims that the concept of the iPhone were in the public domain and were already used by Sony among other. Documents circulating at Apple recognize that the strength of Apple is not in developing new technologies first, but in successfully promoting and commercializing them.

During this trial it was discovered that the design of the iPhone has actually been made ​​by a Sony employee, as explained in the article on the origin of the iPhone, but it is challenged by Apple.

It does not provide any damage to Samsung for Apple violating five essential patents, following the "patent exhaustion doctrine". Samsung would have implicitly allowed Apple to use them.
But it grants Apple 1 billion and 49 million dollars for its UI patents!
It seems that the jury was hasty as it awarded 219,000 dollars in damages for the design of Galaxy Tab 10.1 while it was found that it does not copy the design of the iPad! This led to correct the verdict. This and other inconsistencies could affect the appeal proceedings. And so the jury foreman (Velvin Hogan) is a software patent holder (#7352953) and he led the jury to not consider Prior Art. (Grocklaw)

It appears in the interview he gave that after finding that the Prior Art does not operate on the same hardware, it should not be taken into consideration, which does not comply with the patent laws.

Not that there's anything [wrong] with older Prior Art - but the key was that the hardware was different, the software was an entirely different methodology, and the more modern software could not be loaded onto the older example and be run without error. (Source BBC)

But you do not specify a processor (hardware) in a patent. It seems the jury confused invention and implementation. Code is covered by copyright, patent is a different thing.

Then when asked if he has studied the validity of patents he replied:

No. However it is not the function of the jury to consider it. The judge asked us not to question the current patent system.

Instead jurors are always expected to judge the validity of a patent before deciding whether it has been violated or not, and the jury instructions explained that in detail (29 to 33 and 46 to 52).

And it turns out that the patent "pinch to zoom" #7,844,915, one of the five for which Samsung is condemned, was invalidated by the USPTO in December 2012, because similar to the previous patent #7,724,242.
This principle was already used on the Microsoft PixelSense touch panel (imaginé in 2001), but Apple claimed that on a mobile, it becomes a new invention.

The instructions actually mention (page 40) the notion of implementation, but about patent infringement and not about the Prior Art. It is as if the jury, although he did not consider the notion of prior art, had read superficially instructions and picked this sentence!

The foreman added that he had not been there, the jury would certainly come to totally different conclusions and seeing as his ideas are flawed, we can conclude that the outcome of the trial is totally biased!

We eventually learns that Mr. Hogan failed to mention a fact: he was in fact previously sued by a company owned by Samsung (Seagate) which led to its bankruptcy. If he had, he would have been excluded from the jury.

Apple accuses Samsung of being aware of the fact and not have said to be able to invalidate the trial. What Samsung say: "And you, did you know?". Apple being forced to reply in the negative, the argument falls apart!

On October 22, 2012, USPTO started to invalidate the patent 7,469,381 which is part of the reasons for the condemnation of Samsung. This patent relating to the scrolling of a list on a touch screen was found not original. This could invalidate the judgment as well.

On December 17, 2012, the judge rejected Samsung's request for a new trial on the ground that a juror statements to the press are not acceptable in court, whatever he may have revealed.

On March 1, 2013, the same judge said the jury had no fololwed Court's instructions, that the award was based on wrong theories and then reduced the amount by $ 450 million. She recommends a new trial after the appellate proceedings.

On November 21, 2013, the jury of the retrial granted $ 290 million in Apple. This for 5 patents including one found invalid by the USPTO. An appeal hearing will allow return to the merits of the case as this retrial concerns only the amount of damages.

December 9, 2013, Apple says it spent $ 60 million for its legal expenses and request that Samsung be ordered to pay a quarter. In other words, it must pay the stick that was used to beat it.

On May 2, 2014, a federal jury convicted Samsung to pay 119.6 million dollars for infringing two patents (Apple asked for 2.2 billion) and Apple also condemned to pay $ 158,400 for a patent infringed but it was willful.

On 18 May 2015 the court of appeal of the Federal Circuit overturned part of the judgment, finding that Samsung did not infringe Apple's trade dress intellectual property (rectangle with rounded corners) on their mobiles. The fine has to be lowered.

On December 4, 2015 Samsung agreed to pay $ 548 million to Apple but reserves right to seek reimbursement if the USPTO confirms the invalidation of the patent 915 or if the Supreme Court reverse the judgment..

Apple's patents:
5,946,647 System and method for performing an action on a structure in computer-generated data (1999). Actually converting a phone number to an address.
8,074,172 Word recommandation.
8,046,721 Unlocking a device by performing gestures on an unlock image.
Samsung's patent:
5,579,239 Remote video transmission system, compressing the signal.
We see that Apple's patents are crap, the Samsung seems more consistent. 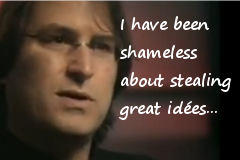 Dirty tricks from Samsung against HTC?

Taiwanese authorities, the home of HTC, launched an investigation against Samsung, accused of malpractice against its competitor. It would have hired students to post negative comments toward HTC on forums or online shops. Samsung does not deny formally, on the contrary its Tawain subsidiary says it will stop the practice of posting comments on websites.