Apple against Android, the black sky of Apple 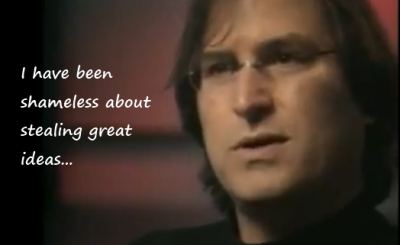 When SCO started a lawsuit against IBM, for $5 billion over Unix code in Linux, an IBM lawyer said them: "If you proceed with hist horseshit, the sky over Utah will blacken with lawyers".

In the war it launched against manufacturers of mobile phones using the Android system, Apple has opened a new front by suing Samsung, accused of copying the design of its devices.

The origin of the iPhone being studied in detail, it is far from clear, however, that Apple invented the touch screen mobile.

Germany: Apple claims rights on the rectangle with rounded corners

When it goes along some other design elements.

In August 2011, Apple gets from a German court an injunction to prohibit the importation of Samsung Galaxy Tab 10.1 tablet in Europe. This actually applies immediately only in Germany.
The reason? The design of the tablet (in fact all the tablets) is similar to a Community design filed by Apple to protect its "invention".
Apple is required by law to describe how the device must be designed to not infringe Apple's copyright. The list includes this statement:

"Overall shape that isn't rectangular, or doesn't have rounded corners."

The court of Dusseldorf has been choosen by Apple for its well known laxity in favor of patent holders.
The ban has been then lifted after Apple been caught of tampered evidence. And then reiterated by the Court of Appeal.

While these models of Samsung are more like those of Apple than others, is a type of design that is commonly found in mobile phones, from Prada in fact.
The HP Compaq TC1100 which dates from 2005, and was a tablet that could be attached to a keyboard, had exactly the same appearance.

For a design to be valid, it must not be necessary for the function of the product. In this case, one can doubt the originality of the concept.

Apple's claim is not without motive. Samsung offers both mobile models very different from those of Apple and others that are very similar to the iPhone. The intent of copying in the last case is obvious. It is even more inappropriate as it is one of its key component suppliers. But Apple's legal arguments are rather weak. If it has popularized this look, it did not really invented it. The law protects invention, not popularity!

With regard to Germany, if Apple has managed to ban the Galaxy Tab 10.1, this appeal was dismissed about the version amended and updated, Galaxy Tab 10.1n, because patents it claims, were in use before they were filed.

In July 2012, Apple gets a ban in Europe to the Galaxy Tab 7.7, again thanks to this court of Dusseldorf.

On 21 September 2012, the Mannheim court (yes, it seems that Apple is trying all the cities of Germany) ruled that the Apple's patents about on the fact that the OS responds or not to actions on touch screens were invalid because too broad, and exonerated Motorola and Samsung.

A Dutch court on August 24 rejected the arguments of Apple on the design of the Samsung devices. Samsung has been condemned for his photo gallery on Android controlled by fingers and announced that it will remove it from all its devices, that will allows it to continue selling them.

On January 24, 2012, the Court of Appeal of La Hague dismissed definitely Apple's lawsuit against Samsung, which was based on the Community Design, the design of the iPad. But what is surprising is the reason why Apple lost the case: the iPad 1, and iPad 2 actually differ too much from the concept described in the registered design: they can therefore not even be considered by the court and Apple has no commercial product whose filed design is in competition with Samsung!
Also a list of devices have been selected by the court to constitute prior art. Apple did not invented anything, many others have used the same design before! 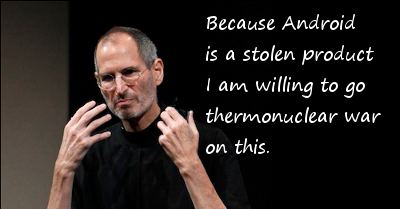 USA: The trial which reveals the true origin of the iPhone

In the USA, 22 June 2012, Judge Richard Posner has decided to dismiss with prejudice an interplay complaint between Apple and Motorola for patent infringement, saying the two companies could not assess the damage actually claimed. There's a weariness of justice to the tenacity of Apple or perhaps a better understanding of the problem.

The San Jose (Calif.) trial against Samsung is covered in a dedicated page.

In March 2011, Apple sued again Motorola in Wisconsin because the cost of its essential patents is too high. The company relies on the court to determine the right fee, but provided it is less than $ 1 per unit (it asked Samsung $ 30 for superficial patents). What the judge answered, since you do not want we freely determine the price, you do not need us, the trial is dismissed with prejudice on November 5, 2012.

UK : You annoy us

Further proof that Apple annoys justice with its repeated complaints is that in July 2012, an English judge (the firm makes ​​trial in all countries) condemned Apple to put on its website an insert admitting that Samsung has not copied the copyrighted design of the iPad!
The goal is to avoid customers thinking Samsung's tablet is illegal. But the way Apple handles this case is more than amazing!

China and Mexico: The biter bit

In China it sued a company that owns the brand name iPad since 2000 (Apple's iPad was launched in 2010) to prohibit it from using the name while it was offered a financial settlement. Not only Apple loses the case, but it is now forbidden to use the iPad name in China, it has to sell its tablets under another name! There is clearly a procedural folly in that firm. What Steve Jobs called the atomic attack against copiers. Beware fallout!
In July 2012, Apple paid $ 60 million to the firm, Proview, to settle the dispute.

The same thing happens in Mexico, where Apple sued the call center iFone for competition to the iPhone trademark. More precisely, Apple wanted to get the trademark in class 38 that iFone had registered since 2003, so four years before iPhone. Apple lost the trial and now this is Apple that is sued! Always the same arrogance ...

South Korea: In the same bag

August 24, Apple and Samsung have both been sentenced by a court in Seoul for an amount less than $ 40,000, and the ban of their products.

August 30, Apple has lost a lawsuit against Samsung accusing it of violating its patent 005930 on syncing music and video with a server. The Samsung Galaxy has nothing to do with Apple's technologies, said the judge.

Apple lost the case on the design of the iPad as in all other countries. Maybe it should try the Congo or Galapados?

Nobody knows who copied who

This is not the first time that Apple will make a case against another company, accusing it of stealing inventions it itself has taken from others.
In the past it had sued Microsoft, accusing it of copying the principles of his operating system with a GUI and the mouse.
An interface that it had directly copied on the products of Xerox labs in Palo Alto.

Moreover, even if Apple is very aggressive in defense of his "inventions", it is not repugnant to take over the innovations introduced by Android or other systems such as:

We know who stole who : The Noise Free Wireless case

This is the name of a California company that has developed a method of filtering ambient noise for a microphone, process integrated directly into Apple's hardware, but under a different name. To convince Apple to adopt its product, as usual, the company had several meeting attended by Apple engineers. Note that the process was patented in 2007.
After these presentations, Apple deposited in turn a similar patent in the name of the engineers attending the presentations. It commend in 2009 the production to a fake company, Audience, on the basis of patents copied.

This recalls a similar case where a company had submitted a compression software for hard drive to Microsoft which was eager to copy the code, for what the firm had been convicted.
NFW now sues Apple in court. If the complaint is really founded, and there is a good chance that it is, it is interesting to see how a company that sues all the "copiers" of its devices, is itself acting on other's inventions.

Conclusion: Apple just forget what it owes to others

Apple uses for iPhone technologies that were developed for 20 years, notably by Samsung which has invested billions since 1991 in the mobile area. Samsung holds patents on techniques of data transmission without which the iPhone would not work. Apple refused to pay royalties on these patents. After all, it is a client of components to Samsung, and a vendor can not sue its customers (the reverse is apparently possible).
Apple has even found natural to enrich the iPhone with the notification system of Android. But when competitors incorporate technological contributions of Apple, like Apple used technologies of others, the firm feels outraged, and threat of thermonuclear war. It goes to the courts of every country in the world.
We have never seen before such cynicism and such abusive behavior in using the weaknesses in the U.S. patent system.