The older programming language got several major evolutions to keep its popularity, but is now totally overshadowed by object-oriented languages ​​derived from C.

It was an easy to learn language, and successfully for this reason in the past. Now Python, Ruby and Scriptol are the simplest to use. If you want to program Microsoft's applications by scripts, learning BASIC is also useful. Server-side programming on Windows may be made also by using ASP which is a version of BASIC. 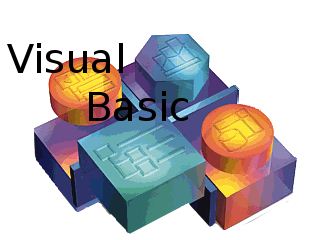 Invented in 1964 by Kemeny and Kurtz to be usable by anyone. The name is defined by the acronym: Beginners All Purpose Symbolic Instruction Code, but that seems to be posterous to the use of the name that originally means just: basic.
The first versions have line numbers and goto and gosub (subroutine calling) instructions to these line numbers.

Bill Gates with Paul Allen created their version, originally called Altair BASIC, and they won a contest with this software, that is why Basic has long been used as a development tool in Windows, before finally being replaced by C#.

The interpreted version has been widely used with first personal computers, including the Integer Basic (from Wozniak) and AppleSoft (from Microsoft) on Apple II, and IBM BASIC (Microsoft) on the first PC from IBM.

You can make classic BASIC programs with these tools:

Visual Basic has been created by Microsoft in 1991 and succeeds to Basica and QBasic from the firm on PC compatibles. It is aimed at Windows applications and manage events (such as mouse clics).
Visual Basic no longer uses line numbers to call subroutines and is now object oriented... The language remains simple to learn. It has not the power of C++, C#, Go or Java, however.
For the .NET platform was created Visual Basic .NET (Visual Basic 7), a new object oriented language. This version is near C++ for its features.

The Visual Basic compiler Roslyn from Microsoft (also a C# compilter) has become open source, and working with the Mono runtime, it gives the Basic language a renewed interest because it is now possible to build applications on any system, including Linux!