PHP, a language for building Web pages on the server 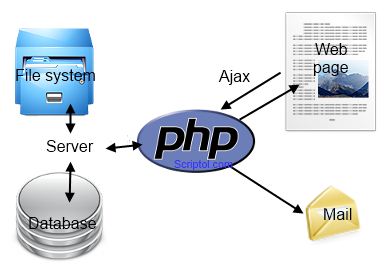 There are different views on how to optimize language to speed up its operation, and Facebook has even taken a radical approach by creating a compiler and a virtual machine. But this language became universal on the server side. PHP is the P of LAMP, a popular architecture that includes the Linux operating system, the Apache server and the MySQL database manager.

A PHP script produces web pages, and may be embedded inside HTML code as JavaScript but works server side. The interpreter may be used locally on the desktop.

The language was designed in 1993 by Rasmus Lerdorf because it needs a free tools to program Web pages and it was released under the name PHP/FI, Personal Home Pages / Form Interpreter.

"I never thought while writing PHP that someday millions of people will be looking over my shoulder into my code. If I would have known that, I would have surely done a few things differently".
Rasmus Lerdorf, 2012.

Having worked at Yahoo!, Rasmus Lerdorf then was employed at WePay and then Etsy. He then developped PHP further with the help of other programmers and made it open source for the community of users. A new engine was created for PHP 3 and a new name given: PHP Hypertext Preprocessor in 1997. Recursive acronyms were the trend with name like: GNU is Not Unix, PNG is Not Gif and so on...
The Zend engine was created in 1999 for PHP 4.
PHP 5 was released in 2004, it is more object-oriented and supports XML. Execution speed was doubled going from PHP 5.3 to PHP 5.6.
PHP 7 was released on December 3, 2015. There are no PHP 6 after the project aborted some of its features were transferred to PHP 5.

PHP borrows ideas from C and the shell of Unix.

The if structure has elsif and else options.

The definition of a function starts with the function keyword, followed by the name and the list or parameters separated by commas, and the body is enclosed between { and }.
The return keyword in the body of the definition allows to return one value.

The body is similar to the global code.

To work locally, including for development, you had to install a server and then run the script in a browser with the prefix http://localhost.

Since version 5.4, it becomes redundant as a local server is included in the distribution. The server is started with this command:

Where 1100 is the port number (this is an example).  To launch the index.php script, and display the result in a browser, type in the URL field:

The advantage over solutions like Wamp is that it is not necessary to move the files to a specific subdirectory inside the directory of Wamp, www in this case. Scripts and PHP pages are working where they are.

Why use PHP? The user experience

PHP is an Internet tool, running server side, it is a scripting language that may be embedded into web pages. It is usable for processing large data and build a HTML page that display the results. (JavaScript is convenient for dynamic change of HTML pages.)
PHP 5 is a simpler concurrent to Java as an application server and a platform for web applications and web services. It eases the use of XML, MySQL, SQLite, SOAP and many database systems.
It is the most used language to build a CMS, a content management system.

The language was developed from day to day, to add the features needed, without well-defined plan. As a result it lacks consistency, clear rules, and we must constantly refer to the manual, especially to find the parameters of a particular function.
For example arguments for the substr_replace function are the original string followed by the part to be replaced and the replacement string, while the str_replace function has for arguments the part to be replaced and the replacement string followed by the original string.
The fact that an array is also a dictionary, so that the indices are keys, is a source of headaches for programmers.

Read more about PHP inconsistency in PHP, a fractal of bad design. But this article is not without errors. For example, PHP has a debugger (see the list of tools below), it works without Apache, constants are not functions, etc...

There are actually many alternatives, Python, Ruby, Node, Go, and more recently, Julia.

The PHP 6 project with Unicode support has been abandoned, but some features seemed so useful that it was decided to incorporate them into PHP 5:

Support for Windows XP is dropped since 5.5.

So we are anticipating a long rollout cycle for PHP 6, and we did not want to take the same route that the Perl project did, with project contributors still working on Perl 6 I think six years later. People make fun of Microsoft, but take a look at Perl 6...

In 2015, PHP 6 still does not exist, and they preferred to skip it to PHP 7. Actually, Perl 6 is still not finished either!

Formerly called PHP Next Generation (PHPNG), this new version succeeds to PHP 5 (there will never be a PHP 6), and wants one hand faster performance with a JIT interpreter lake HHVM and on the other by making the syntax more consistency. The performance gain is 100% on average compared to 5.6.
Asynchronous programming make parallel processing possible.

Should we move a site to PHP 7? This allows better performance and memory saving, so it is certainly recommended. However, we must ensure that there is no incompatibility issues as a set of obsolete but still active functions is now removed. For example, the mysql functions.

Technicians at Google advise Webmasters how to optimize the PHP code and indicates several points on how to change the code, replace control structures, to optimize it at best.

But the creators of the language have a different analysis. This controversy is interesting for webmasters that use PHP on their site because it provides useful information on optimizing the code.

The only point on which both parties agree, is that it is best to migrate to the latest version of PHP , as it is always the fastest.

HHVM (Hip Hop Virtual Machine) is a JIT compiler created and used by Facebook, available on GitHub with the source code. Running on the HHVM virtual machine, PHP is twice faster than on the Zend interpreter. HHVM replaced PHP 5.3 at Wikipedia too (they plan to move to PHP 7 now).
Comparisons with PHP 7 showed that HHVM is slightly faster for the legacy code, but when the code takes advantage of the new features of the language, it's the PHP 7 interpreter the faster.

For an analysis of its operation, a detailed article: LLVM code generation in HHVM. LLVM is now the final backend in a chain of intermediate representations

PHP is firstly compiled to HHVM bytecode, then in a second intermediate representation. It is then translated into assembly language which can be converted into LLVM bitcode.
The virtual machine works with the Hack language that replaced PHP and became incompatible with it in 2018. It may be replaced by PHP 7 without loss in performance.

See also the history of HipHop.

Most editors have syntax-hightlighting and auto correction for PHP, Visual Studio Code for example. IDEs could add more tools.