Scala, a higher level language on the JVM

Created by the LAMP group at the Ecole Polytechnique Fédérale de Lausane (EPFL), led by Professor Martin Odersky, Scala is a universal programming language designed to allow a simple and concise code. It is close to Java with features from various other languages but also brings innovations and simplifications, which is reminiscent of JavaScript. This translates into a slower compilation.
It is inspired by object-oriented as well as functional programming languages. According to the authors, the Scala code is two to three times more concise than the equivalent code in Java. But it is also possible to write code as unreadable as Perl. As Perl moreover, it allows to do the same thing in very different ways.
The code may be compiled to Java or .NET bytecode and it is compatible with theirs respective runtime. In February 2015, the Scala.js compiler to JavaScript is declared usable in production.

The scala word is short for SCAlable LAnguage and means stairs in Italian, which symbolizes programming by steps.
The compiler scalac is licensed under BSD. Since 2014, the main developers of this compiler are working on a new language, Dotty, a simplified version of Scala, which should help to remove difficult problems to improve this compiler.

On March 14, 2017, Scala Native is announced. This involves replacing the Java virtual machine with LLVM and thus creating executable binaries. It accompanied by a complete library but still requires Java to operate.

In May 2021, comes Scala 3, offering simplifications in the syntax. It is possible to write code using indentation like Python does in place of braces. Braces are now optional, but you can still use the classic syntax. 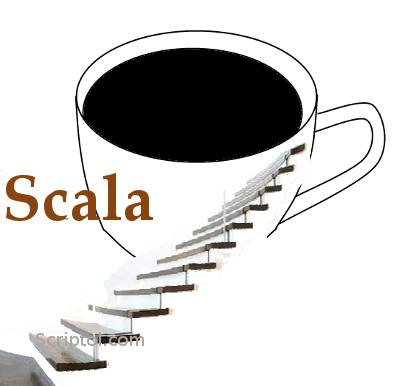 You should know that many elements of language such as for and return do not behave as we used to in previous languages​​.

Scala facilitates the gradual evolution of the programs over time.
Scala code can easily interface with existing Java code. It is compiled into Java bytecode. We can use both languages in a single program, Scala providing the advantages of being more concise.
Scala allows you to easily process XML documents.

The social site Twitter has left the Ruby language for backend and implemented its services in Scala, to take advantage of the scalable nature of the language. The site is gradually increasing its audience and offer new services over time, hence the need for a language that facilitates the expansion of programs without rewriting.