On the basis of robotics companies acquired and technologies it already has, one can imagine what will be this robot in which Google is investing heavily. 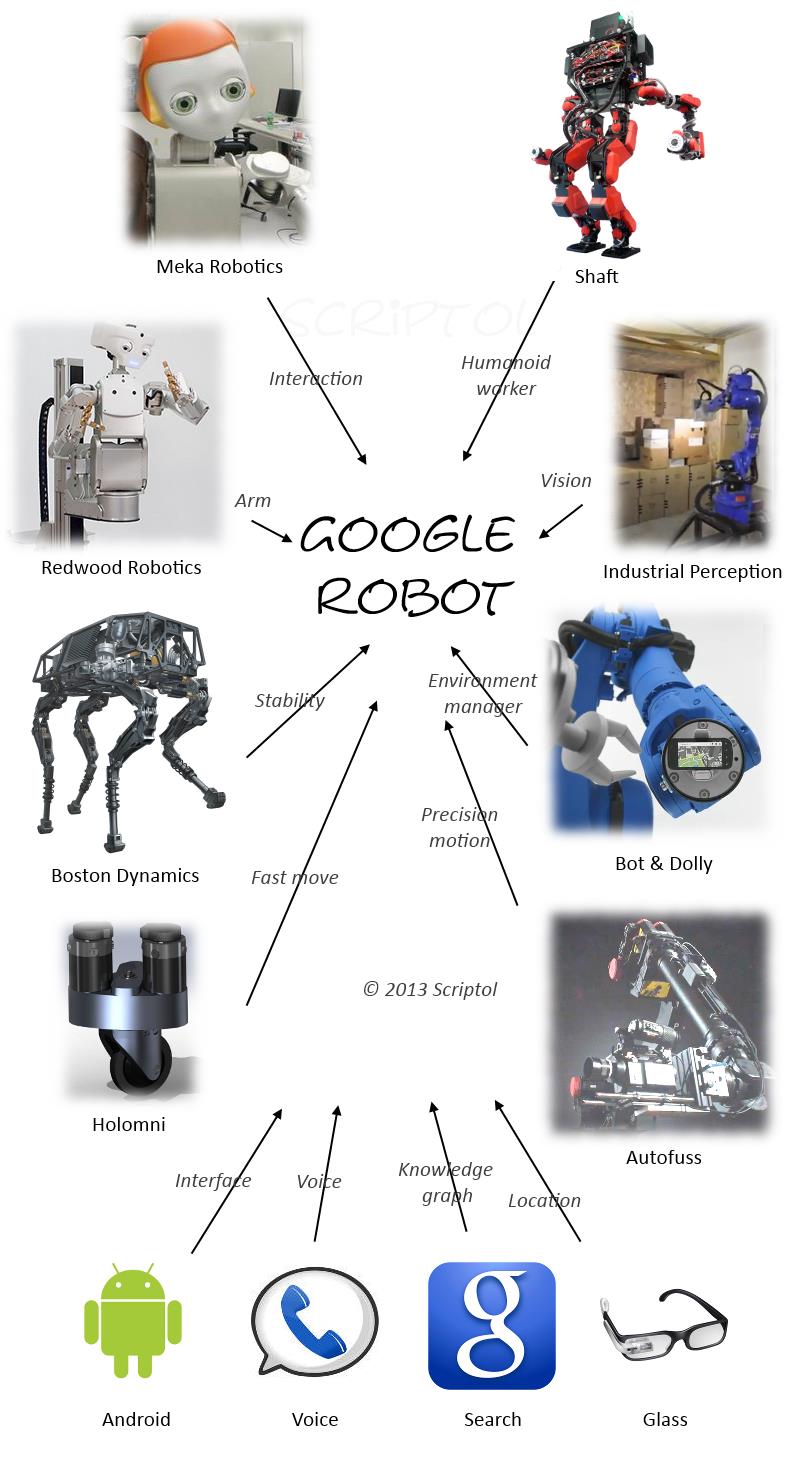 A starting point for a humanoid robot capable of performing human tasks is provided by Schaft which has a prototype, which is the winner of the DARPA challenge in 2013.

For good interaction with humen, Meka Robotics brings expertise already implemented with HCRL. Interaction with objects and the environment benefits from the experience of Industrial Perception and its vision system for a robot to reach and grab objects, that of Autofuss, with precise movements coupled to a camera, and Bot & Dolly which showed how to create interactive virtual environments. These seem aimed to leisure, a kind of 3D cinema, but it has conceivable uses in a world populated by robots.

The acquisition of Redwood Robotics endows the robot with an artificial arm specially designed to be inexpensive.

Holomni specializes in robots moving on a wheel, according to the principle of Segway. It is suitable for flat surfaces, but on more difficult terrain, the contribution of Boston Dynamics and the robots which never fall give more latitude.

In addition to these new acquisitions, Google already has software that can assist in the operation of a robot. Android and the touch interface to interact with the robot and control it. Voice for speech recognition, and therefore the interaction through speech. The search engine and in particular the knowledge graph, when the robot is connected to the cloud, gives it a knowledge of the world. The principle of a cloud connection is already a reality with the project RoboEarth, and Google is skilled enough to create a such system.
KG is an algorithm that can identify the context of a query, and provide relevant information about an object in this context, and there is no doubt that it is useful for a robot to manage its environment.
And finally, the software designed for augmented reality in glasses is the link between a knowledge base and a physical location, using data from Map.

Google has the technology to create a humanoid robot that can walk, view and manipulate objects accurately, respond to the voice, interact with humans in any environment and with a base of unlimited knowledge. It sounds impressive.

Software that I have not placed on the image, because it is not officially announced, is the Genie project. It was presented to building professionals and have induced great enthusiasm. It reduces construction costs drastically by an automated control of all aspects of the production and use of components made at the factory.
To complete this factory part, the Google robot could carry out the assembly and construction of modern and sustainable quality buildings in a few weeks. This is easier with preformatted components. It is even possible that the robot project is specifically designed for this purpose. This would be a significant advance in housing.
The partnership with Foxconn which wants to install one million robots in its factories but struggle to make them effective, shows another possibility, with the creation of a Google system to operate them.

Project architect Andy Rubin has left Google for a long time. Boston dynamic and Shaft has been sold to Softbank which in 2012 bought Aldebaran and its robot Nao. Knowing that Softbank did nothing better than Nao, and the failure of its Pepper robot, we do not see the future of the android robots here.

An article from Bloomberg, Google has made a mess of robotics, displays Google's action in the field as detrimental for robotics. (October 2017).