The latest model of a line of humanoid robots created by the National Institute of Advanced Industrial Science and Technology of Japan. It could look more human, but it has been deliberately avoided because some people are disturbed in presence of human mechanics. They get used over time. Its role is to fashion shows. 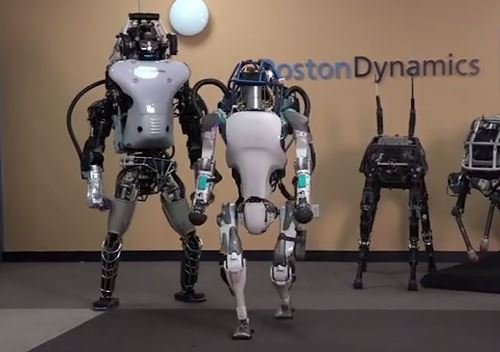 Boston Dynamics, now a subsidiary of Alphabet-Google, is already known for Big Dog, the transport robot that never falls. There is now (click on image) a humanoid version, which seems apt to handling. With two legs it falls more easily, but knows how to rise as easily.

It is 1.3 m and 52 kgs. With 34 degrees of freedom, it moves like a human and can perform similar tasks.
It communicates, recognizes faces and voices. 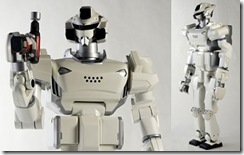 Form both Kawada Industries, Kawasaki Heavy Industries and the National Institute of Advanced Industrial Science and Technology of Japan.

Most of the simple human tasks are accessible to it, such as using a screwdriver.
Its autonomy movement is two hours.

With 17 servo motors (34 for Asimo) it can do a variety of movements, depending on its programming.

It is characterized by fluid motion, almost human, made with 18 degrees of freedom.
It is commanded remotely from a PC, it does not have embedded artificial intelligence.

Pino and Nuvo of ZMP

The Nuvo model is 40 cms and 2.5 kgs and was presented as the first robot show

It can wear and utilize different items.

The goal of this robot is to cooperate with human beings in different contexts and in particular in the world of work.
In perhaps an ambitious plan is to use it for rescue, education, and arts. And at home.
One solution being explored is to use it as attending the helper in Japan.

The same company has also contributed to the creation of the SHINPO robot.

This model is still under development. It measures 1 m and weighs 8 kgs It has 26 degrees of freedom.
It is not able to move easily, but is intended for professional use in static station.

It has the option of facial recognition and can send alerts. It can therefore serve as a local guard or childcare.
For example, if it is located in front of an unknown person, it will call on a given number to send a message.
It can:
- Talk and sing.
- Recognize the environment and the objects that compose it.
- Recogne a face.
- Interpret gestures.

It has a 7-inch screen, a communication by Wi-Fi and WiMAX.
It can be commanded by phone or Internet.

There are plans to commercialize it for $ 2000. 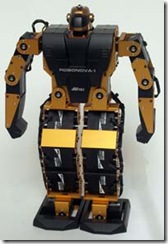 A programmable model, the movement seem almost natural. It is programmed easily on a PC using the mouse on a graphical interface. You can also use directly the Robo-Basic language derived from Basic.

Robonova is available in stores for $ 700.

This robot won the Robo-One challenge. 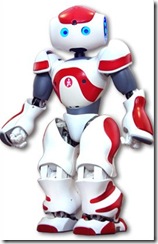 It is 58 cms tall. A software can program the behavior of the robot in the Urbi language under Linux and give it new opportunities.

It is actually available to purchase.

Hubo is a short for HUmanoid RoBOt.

It has a plastic mask representing Albert Einstein. Its face has expressions. Its voice recognition system allows it to communicate.

This model is still under development.

Qrio for Quest for cuRIOsity.

It has voice recognition and facial, and it is expressed in speech synthesis. It walks, locates objects and easily manipulate them. 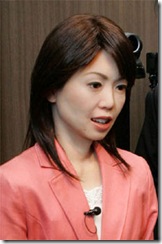 It is a realistic humanoid specially created to replicate human expression.
It/She reacts to the environment.

It/She can act independently or replicate the movements of a distant person.