Earth, virtual travel in the World and the time

Google Earth is an online service accessible through a software to install on a computer, offering a 3D virtual representation of the world. 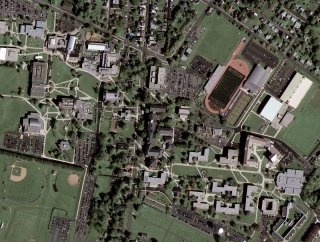 Images are taken by GeoEye, a satellite funded half by the NGA (National Geospatial-Intelligence Agency) and by Google and other sponsors (all for $ 500 million), which offers the finest resolution ever achieved for aerial images. It provides images of Earth in its service. While the NGA is an agency serving U.S. security, GeoEye is not a spy satellite, on the contrary, the pictures he takes are for the public through the Internet.
The definition allows a precision in detail of 43 cm. Note that U.S. laws prohibit the publication of images with an accuracy of over 50 cm, so it is the latter which is the level of detail in the photo at right. This is the first image taken by GeoEye-1 and it is a photo of Kutztown University in Pennsylvania.

Users are also invited to contribute to the project by providing 3D models of buildings. By combining these models with StreetView images, it is possible to virtually visit cities.

In late January 2015, Google Earth Pro, which provides tools for professionals such as HD printing of views, precise measures of lands and buildings, became available for free to all.

A 3D vision is offered of oceanographic funds, to explore up to 11 000 meters trench (the deepest, the Mariana Trench).
You can track the movement of marine life but Google wants to avoid providing to provide information that can be used by fishermen (eg whale killers).
Google has partnered with several sites related to Sea to provide more information to Internet users.

From the version 5, the historical function makes it possible to track trends over time of a geographical location: the construction of a building, a melting glacier, the advance of desertification in Africa ...

Google Earth not only gives you more to travel in 3 dimensions, but adds the time travel too. In fact you can now visit ancient Rome in 3D thanks to Earth.
To access the fourth dimension, type "Ancient Rome in 3D" in the Gallery folder. But first download the latest version of Google Earth ...

After the discovery of a forest of another age in Africa, Earth has done an archaeological discovery: a very rare hominid in South Africa.
Indeed, from images taken by satellites and reproduced on Earth, researchers are able to identify suitable sites for archaeological research and then focus their efforts on these sites. 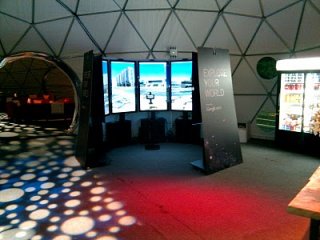 Google has integrated the ability to virtually walk into the Disneyland Paris, thanks to Google Earth.
To achieve this result, it was necessary to integrate to Earth 85 000 pictures from which have been made textures for a 3D vision.

To immerse yourself in a virtual world, Google has developed Liquid Galaxy (picture right), a set of screens to view the world through Earth.
The video is awesome ...

The system was installed in many locations across the world, and if you feel able, you can build your own installation! 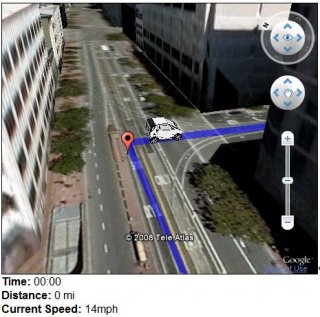 After the flight simulator, a driving simulator is now available in Earth, of course to be used as a tourist and not for racing. Watching the scenery while your vehicle is moving in the streets of a city that you would like to visit, or across a country, in mountains...
For the simulator to work, you need, if not already done, download the Earth API. When you go on the demonstration page, if the API is not found on the computer, the site ask to download it, then you have just to click on the downloaded executable file.

To use the simulator, choose a starting point and a point of arrival, two nearby towns, for example. The system loads data and you can click on "start" to begin the ride ...
The software operates as a site to calculate routes to which Earth adds the ability to see the scene that we will see!
The accelerator is in the form of a + button to click with the mouse.
The car is not a Porsche or a Ferrari but these are the landscapes that are interesting ...

It is an online game based on Earth. In fact, Google provides an API that allows software to interface with the online virtual representation of the real world it offers.
The software uses Flash, JavaScript, Sound Manager 2 and Sketchup for the making of 3D models.
It lacks just a collision detector.

A Dutch company had the dubious idea of using Street View API to create a Doom-like game: the goal is to shoot at passers of all cities of the world. The application has been very successful with thousands of visitors  per minute before being disabled by Google. Apart from the immorality of the thing, it blew the servers. It only lasted four days.

Building Maker was retired on 1 June 2013. It was an online modeling tool for Earth compatible with Sketchup. Customers can add buildings on the map with their signature. An example with the Forbidden City which is being restored thanks to 3D printers, the past and technology coming together!

Earth provides pictures of buildings that are recorded by satellite. To go further, the user points to a location on the map where it would add a building that will be actually visible in 3D, so from all angles of view.
The online software provides pictures of the building taken from different angles and a set of intuitive tool. It also displays a 3D cube. Remain to the user, with the tools provided, to model the building based on pictures.