C++, a system language and for fast applications

The C language has been augmented with objects to facilitate the representation of entities to be processed, and code reuse. This has transformed this system language created in 1972, into an higher level language, C++.
Other features have been added over time as templates, tuples, concurency.

C++ was created in 1981 by Bjarne Stroutstrup, who discovered the object orientation in Simula 67 and wanted to add it to the C language while remaining compatible with it and thus preserving its advantages, including portability between systems. 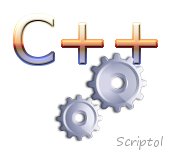 The first ISO standard for the C++ language date of 1998, it is C++ 98. A new version was created in 2011, C++11. With this version that brings nothing to readability and modernity, the language is rooted in its role as a system tool that has been diverted for a time.

The increasing complexity of C++ in version 11, 14, etc... was criticized especially by Donald Knuth and Edsger Dijkstra. The designer himself was not happy with all the features added yo the syntax within time and he is has once referred to the history of the Vasa, a Swedish boat that has been added so much that it sank after the very first meters. Bjarne Stroustrup:

Within C++, there is a much smaller and cleaner language struggling to get out.

It is used as application language thanks to graphical interface such as Qt and GTK and with 3D engine such as Unreal Engine. It is clear that it was designed to optimize performances of the computer and certainly not the programmer productivity. Errors that inevitably come with its hard-core and unreadable syntax are paid dearly in time debugging. Used where appropriate, for system tools, it provides undeniable advantages over C, such as RAII, which will be discussed below.

Short history of the language

C++ describes classes into header files, and body of methods into source files. By declaring instances of classes you can reuses sets of variables and methods without to define them again.
Overloading allows to redeclare a method with different parameters but the same name.

Classes inherits one from other and share their methods. Multi-inheritance remains specific to C++, this has not been reused on derived languages.
Over time, the definition of struct has evolved to become equivalent to that of a class, with the difference that a structure is public by default when a class is private by default. Structs can have methods and support inheritance and in fact we can avoid the use of classes entirely in an OO program.

This conceptual model is criticized by Trygve Reenskaug, inventor of the MVC and DCI, for who it is too static and poorly adapted to the reality of processing in which the representation of objects should vary depending on the context. But this drawback is shared by all current object oriented languages except perhaps by those which like Go where inheritance is replaced by composition.​

C++ introduced RAII (Resource Acquisition Is Initialization), the principle that when an object is created and thus a memory area is required, it will be released automatically when the object is destroyed. This avoid the need of a garbage collector and of the free command like in the C language.
The resource can be an object, a class, an instance of file. It is declared in a scope and released when leaving the scope.

The new ISO standard of the C++ language is extended, said Bjarne Stroustrup, its creator, according to three levels:

The definition of the standard has been approved by the ISO C++ comittee on March 25, 2011.
The internal UTF-8 format is now supported for strings.

For loop over an interval.
As it is implemented on most scripting languages.

As you can see, the language retains the principle of minimal source code. It does not use the keyword in as do  most languages​​, but a symbol instead.
A tradition that was born when it was necessary to save each character to reduce the size of code! Memory was expensive in 1972 ...

Lambda function.
Functions defined in place for a contextual use.

rvalue.
This is a reference to the contents of a variable, where the A variable is assigned the content of B without a copy but by moving the pointer on the new content, in the perspective where B is no longer used.

Variadic template.
Template whose number of arguments is variable.

Static assertion.
Introduced with the keyword static_assert, it tests the validity of an assertion at compile-time.

Attributes of classes may be assigned directly in the definition of the class.

New object appear that already became familiar in scripting languages such as PHP.

And many various components of libraries and improvements. For example, now you can assign a static list to a vector at its declaration.

Multiple threads with shared memory are easy to use. To make it, we create a function and call it through a function pointer in the thread command ...

The join() command starts the thread.

he async command calls a function asynchronously, something that has become familiar with Ajax.

Features for concurrency in C++11:

Objective C is another object oriented version of the C language, simpler than C++. GnuStep is a objective-C IDE for Linux and Windows.