NetRexx, another approach for a programming language

Object-oriented and running on the JVM, this scripting language is original in its design, and even strange.

The REXX (REstructured eXtended eXecutor) language was created by Mike Colishaw in 1970 for IBM, and implemented on the IBM 370. It was used as a scripting tool on OS/2. It was intended to provide a clear and structured syntax.
NetRexx is a new, object oriented version which was written in 1997, and which compiles into Java bytecode to run with the Java Virtual Machines.
The latest release date of 2013. 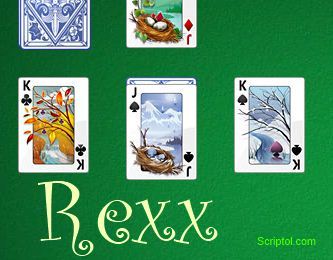 A king (rex in latin) card is sometimes used
to illustrate the language.

It is talked quite a few of NetRexx today. It is actually not widely used apart on IBM's environments.
REXX addressed to the novice user, rather than professional programmers. It could be used to scientific computing but these days it is largely supplanted by Julia and Python in this field .

It is intended to replace Java with a simplest syntax and was the first langage to be ported on the JVM beside Java. It can make applets too, uses the Java's API.
It is a mean to use a same language for scripting and applications, but numerous other languages do the same. In fact, since its inception, it has been usual to port a language to the JVM (Jython, JRuby, etc...), which makes NetRexx useless for a practical use because it has less features.
Its main interest is to study a different approach in the design of a programming language, and the simplification in the syntax it brings.

The language combines the simplicity of the syntax with the complexity of constructs.

NetRexx source may be either compiled into bytecode, or directly interpreted. In the first case it is compatible with the Java API and its classes.

Even if the language brings many simplifications that make writing a script faster, its design looks weird and had room for improvements. It is a powerful language, but which bring no unique features.

Script waiting for an answer:

The applet is loaded with this HTML code: