Jacques de Vaucanson created in the 18th century automata that were close enough robots. But they had no interaction with their environment. 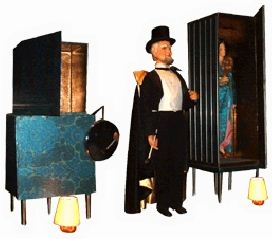 Automata resemble robots, but they did not act on the objects they encounter, their role is to provide a fun such as the automaton magician and his sidekick. (Souillac Museum)

What difference between a robot and an automaton?

Is assigned to a robot the ability to:

Automata existed long before robots so they were more limited and do not perceive their environment, their programming was very primary. These are the only differences with robots. Industrial robots are rather close to automata.

A purely mechanical object however may be is breathtaking, such as the Singing birds pistols, manufactured in 1820, the last pair was sold in 2014 to over € 5 million. It is a precision manufacturing with 700 mechanical components.

We rank in automata machines that have a role of amusement or no effect on their environment.

He looks like a chair on two skis, but it is able to weave between the doors of Olympic track. It was in this time Slovenia has presented a new kind of automaton ...
The automaton has a perfect system of balance. It identifies objects and thus is able to avoid them. To achieve this, it only takes a camera, a GPS and a program.
Note that it is using skis quite common and commercially available.
The automaton who skis was presented at the International Conference on Intelligent Robots and Systems in Slovenia in October 2009. 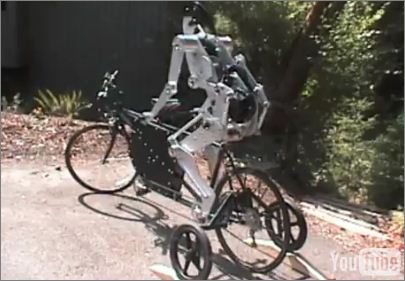 This automaton is able to pedal in tandem, it was given the name of Joules. It has the shape and proportions of a human being and it shows that a robot can walk, run, and even pedal!

Why build a mechanical cyclist? Chris was frustrated to see others, especially young people, build all kinds of things. He wanted to show them that he had ideas and could build something unique.
Passionate about cycling, but having not touched a pedal for a long time, he wanted to continue to achieve something in this area.
This assembly of aluminum parts and bolts causes the wonder of mechanical engineers.
It has an electric motor with battery, weighs a hundred kilograms.

This automaton motorcyclist was developed by the manufacturer of lubricants Castrol in order to test them.
Note that it does not really circulate, it remains in the shed but his behavior is similar to that of a biker who changes the gears, accelerates, brakes ... 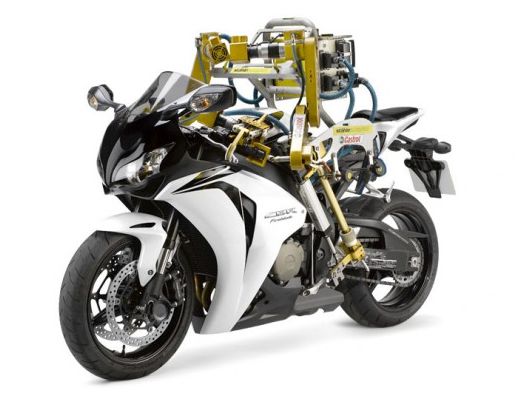