They are huge and can move with humans on board. Robots monsters are not widely known. Why?

The robot arachnid and the robot elephant, both huge and which can carry several persons are two examples of these real monsters.

It is called The Princess and measures 15 meters high. Its first appearance occurred in 2008 in Liverpool which was the capital of European culture for this year. More than 10,000 people have seen the monster in the streets of Liverpool. It was latter viewed in Yokohama in 2009. 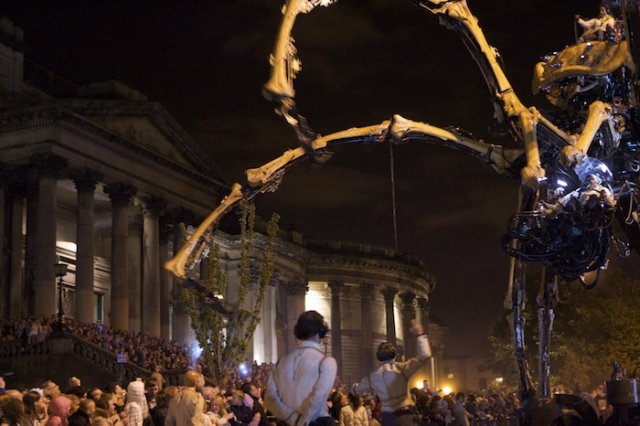 It took over a year to build it and develop its complex hydraulic systems that make it move like a real archnide. It walks over 3 km/h.

It had its detractors, whose charitable Anglo-Saxon company Anxiety which complained that it could cause harm to people who suffer from arachnophobia. One agree with them.

The great elephant of Nantes

Napoleon wanted to build a giant elephant to celebrate his triumph. A cardboard model was made which was inhabited by kids according to what said Victor Hugo in Les Miserables. But the project was abandoned.

The idea was taken today, this time using the resources of robotics. 50 people can embark on this great mounting, go to the balcony or the terrace above through a staircase and have an unobstructed view from the top of its 12 meters. Can be seen now performing a visit of the island of Nantes by tourists that lasts almost an hour.

The machine you see in Nantes is a replica of a machine built jointly by Nantes and Amiens for a show called "The Sultan's Elephant," to commemorate the 100th anniversary of the death of Jules Verne. The first elephant came after the two cities in London and in several other cities in the world between 2005 and 2006. It was dismantled by Royal de Luxe, the manager of the show, to no longer be solicited from all parts of the world. 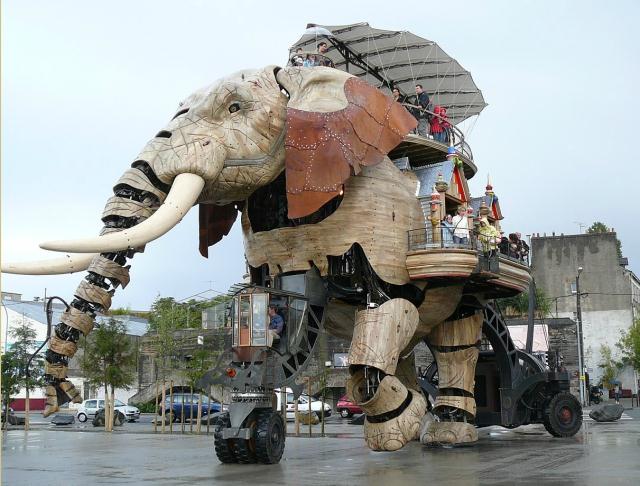 Its dimensions: height 12 m, width of 8 m. Weight of 50 tonnes. It can reach a speed of 3 km/h. It is run by operators who operate the hydraulic cylinders.

Who built these monsters? This is a workshop of machinery manufacturers who settled in 1999 on the island of Nantes and founded the association La Machine for this purpose.

Another project also astonishing though less spectactulaire, this assembly so ingeniously realized that the wind is sufficient to facilitate the multiple legs of the machine and move it forward.