Scientists are working on facial expressions for robots, no only to prove that sci-fi writers with the metal robot they have imagined are dumb and stupid, but to create friendly assistants instead.

The robot does not have muscles for now: its face is powered by several small electronic motors, and they are coupled to a camera to capture and imitate human expressions.

The video image is converted to commands and they are sent at a speed of 25 frames per second!

Such human-robot could be used in education, nurseries and many other circumstances where they can replace human while humanity remain necessary. 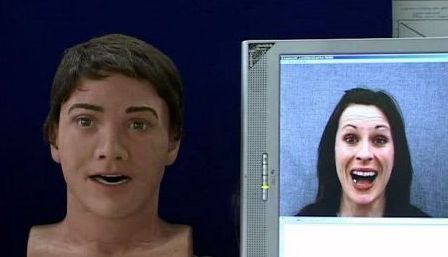