Robotization is in progress

Foxconn solves the problem of suicide

Much has been said of Foxconn, the Chinese company that manufactures mobile phones for Apple and suicides of its employees, too stressed and sometimes ill-treated by the hierarchy.
This problem will go away with an unexpected solution: the next three years the company will use one million robots to perform simple tasks of all production. It is surprising that this is a country where labor is cheaper where robotics develops the most! But it is true that the labor law in China is becoming more restrictive.
The number of currently available robot at Foxconn is only 10,000 but will rise to 300,000 next year and will increase gradually.
The assembly tasks are very repetitive, it is easy to mechanize.
Currently the number of employees is 1 million people, mostly in China even if the company is from Taiwan. Nothing is said if it will be reduced as production continues to increase. Especially the nature of the tasks that can evolve.
And if your mobile phone  commits suicide, too, that sometimes happens, just reboot it, unlike humans. 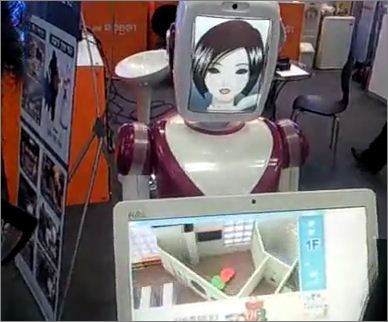 The hostesses are robots ... Video on the right.
The event, held in October in Korea allowed manufacturers to showcase their latest models.
November 2010.

Gostai launched a programming competition on its open source development platform Urbi. The prizes consist of gift certificates and software.
A program needs just to run on a robot simulator to be eligible.
Contest period: September 15 to December 15, 2010. 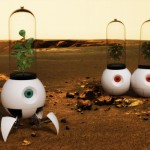 The winner of Electrolux Design Lab 2009 is Le Petit Prince, a robot designed to grow plants on Mars! He is able to search for nutrients to the surface or just below, to grow the plant that is hosted under its dome. The winner: Martin Miklica, a Czech student.
It's a design competition, and the jury is composed of designers, the technology involved has yet to develop ... We assume that the beauty of the object will stimulate researchers and make them want to make an application running actually ...

Noel Sharkey, of Sheffield University, warned citizens in the journal Science against the invasion of robots in homes and businesses: we must prepare vulnerable people before it's too late ... 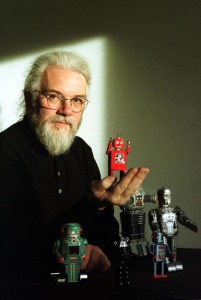 Noel Sharkey and his robots

In the coming year, the number of robots will exceed the figure of 11.5 million, according to the statistics from the IFR institute.

The total number of robot was 5.5 milion in 2008. These figures may be taking into account the specialized robots like Roomba, the robot maid. In this model, it sold 4 million already.

Robots are used for child care or to help people with disabilities, especially in Japan yet. They are also used to monitor homes and are controlled remotely by phone or Internet.

No legislation exists about these machines. And Professor Sharkey fears that security or ethics concerns do not arise, he wants to warn manufacturers.
For the children attached to robots. What are the psychological effects on a child who spends hours alone with a machine, without the presence of a human being?

On the other hand, the use of robots to help elderly, if it gives them some independence, let alone with them as machines without human contact for prolonged periods. Is this desirable?

Professor Sharkey is professor of computer science at the University of Sheffield and is a British expert in robotics. It often occurs in radio technology for the BBC.