The most remarkable achievements in the field of robot insects. Bees, crawling and flying cyborgs imitate nature with more and more realism. 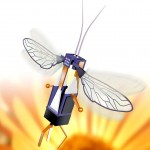 Robobees is a project of Harvard to create a colony of artificial bees to test and promote several disciplines of robotics. More precisely, it is directed by Harvard's School of Engineering and Applied Sciences (SEAS), the Northeastern University's Department of Biology, and Centeye, an electronics firm Whashington. Other institutions that will collaborate also Wyss.

This experience will develop algorithms for control of independent machines operating in coordination.

The choice of the bee as a model arises partly from his flight is perfect compared to other insects, although beetles were chosen as cyborg insects because of their large size for supporting a heavy apparatus.
In addition, researchers are studying the functioning of community of insects causing them to accomplish amazing things and make buildings that are, in their scale, massive.
The knowledge gained should be put forward various sciences such as entomology, biology, robotics.

The schema from Harvard: 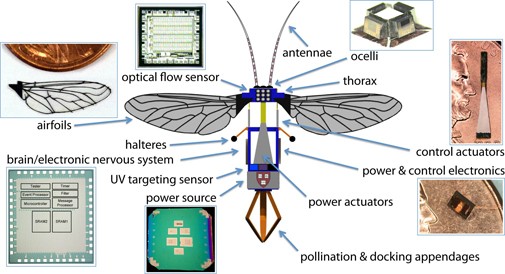 The architecture of the robot bee (Schema by Harvard)

Three research challenges are to be achieved here with the bee and put this schema in practice:

The communication processes are interfaced with algorithms that coordinate the functioning of the entire colony.

Video of the hexapod

Hexapod, a robot insect which has emotions

It is designed to learn to walk by himself, and when damaged, take it into account and adapt. The robot insect can be self-governing and integrate an environment in which it takes cues.

Its creator, Matt Bunting, is a student and passionate about robotics since forever. His professor at the University of Arizona having asked students to design a robot that takes advantage of what the course taught them, the hexapod is born. Even if it really looks an arachnid and has a similar mode of walking, its six legs rather classify it in among insectoids.
Matt wants to go further and give it primary emotions. They are three in number: happy, sad, bored.

He drew the attention of large companies who have offered facilities for free if he wants to share the knowledge he has acquired through his experience. The professor was offered a job in a robotics laboratory. Among them, chipmaker Intel. Indeed, the hexapod uses an Intel Atom netbook and Intel wants to make an argument for advertising...
Crust Crawler, a society that sells robotic assembly kits has also shown interest and wants Matt devise him a hexapod kit.

In addition to the Atom processor, the hexapod has a webcam that offers him an organ of vision. It compares successive images provided by the webcam to assess its own position.
It proceeds by experimentation: different movements are tested, and if one of them allows him to move on, he was selected, which after a period of adjustment eventually provide it with perfect gestures.
His equilibrium is reached.

It is an ideal machine for exploring new environments.

These cyborg insects have been created at the University of California at Berkeley, USA as part of a program of DARPA. By implanting electrodes in the nervous system and muscles of insects, a team of Berkeley manages to control them remotely entirely.

The specimens used for the experiment are a Cotinus Texana in the southern U.S. and a Mecynorrhina torquata from Africa.
The African specimen, much larger, is currently the only one to bear the weight of the equipment in flight.
Well-chosen impulses cause the takeoff of the insect, and can direct its flight and that over a period that goes up to 30 minutes!

We can already image some missions for the cyber-insect, with a miniaturized equipment, already available in the arsenals of intelligence in the area of spying of rescuing...