Webkit, the rendering engine, and forks

The rendering engine of Safari, because it is compact, is used by many toolkits for rendering pages, but now it tends to go hand. 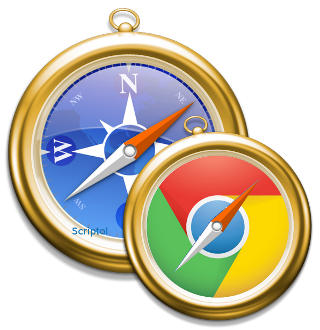 To create its new browser, the Apple company had ignored Gecko and preferred the KHTML runtime that displays the pages in the Konqueror browser under Linux.
Thereafter Apple launched in 2001 from the KHTML code, the WebKit project that became open source in 2007 or more precisely, becomes accessible to third-party applications.
It is also used on Apple and Nokia mobiles. It replaced Gecko on the Epiphany browser for Gnome on Linux.

Google launched its Chrome browser in 2008 using the WebKit code associated with a very fast JavaScript compiler. This started a race for JavaScript engines speed. It was used on Android too.

Latter Google in turn created a fork of WebKit, Blink, to replace it in 2013 in the Chrome browser and on Android.
Blink was choosen by Opera then to replace its own page renderer.

Opera was using WebKit in its Ice browser for smartphones, replacing Presto, its own rendering engine. This browser has a minimalist interface.
But it use Blink on all its browser since 2013.

Based on an overly optimistic interpretation of a sentence of Ballmer, the rumor ran that Microsoft could use WebKit for some of its products, but this was later denied. The sentence was somewhat ambiguous:

"Open source is interesting. Apple has embraced WebKit and we may look at that, but we will continue to build extensions for IE 8." (Developer Conference at Sydney in November 2008.)

However, Microsoft is a contributor to WebKit to promote the use of some of its software in the browser.

WebKit 2 is a new version separates web pages and applications form the browser itself, as already does Chrome. It is used by Apple but not by never was by Chrome which had already its own architecture for this effect.
It was separated from the modified version of Webkit used by Chrome, to become Blink on April 3, 2013. It has separate processes for each iFrame that is more secure.

Webkit is not the rendering engine the most used, which depends on the market share of browsers, as well as use in toolkits such as Qt or Node-Webkit (which originally used Webkit, hence the name, but then moved to Blink).

Rendering engines of other browsers are:

For more infos, look at:

The Norwegian firm announces it would replace its rendering engine by WebKit and also use the V8 JavaScript compiler. After Chrome and Apple's Safari it is the third major browser to use the open source engine for both desktop and smartphones.
Android and iOS Opera's browser is based on WebKit, and is called ICE. The advantage on smartphones is that WebKit is also the native renderer, it gives faster hardware access to ICE. For desktop computers that allows Opera to share all the advanced features of WebKit, what it is also committed to participate. Its first participation is for the multi-columnsfor layout.
This is good news for web developers and webmasters: a compatibility problem less. For users, it will provide a different interface. On mobiles, Opera has 15% market share in 2013 according to StatCounter.