Where is the current technology about conversation with a robot?

Chatbots or chatterbots, are programs able to converse and answer questions of human beings. Waiting the day search engines become chatbots, or oracles like in the Spielberg's movie IA, we see programs already hold a conversation realistic enough that one can not know whether it is a man or a robot. 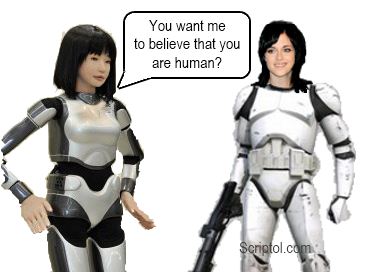 Their ancestor is a rather simplistic program developed by MIT in 1966. The name comes from Eliza Dootlittle, a character in G.B. Shaw's Pygmalion. It was written in SLIP (Symmetric LIst Processor).

Eliza gave vague answers to questions put to it, but sometimes enough to fool an unsuspecting partner.

In fact Eliza was looking keywords in the phrase of the caller and proposed a generic answer according to that. So when he said "The price of tomatoes has it dropped this month?", it replied "Do you think the tomatoes are really important in your life." The same sentence was reusable with a variety of words.
Mailboxes responder used by companies follow this logic.

Eliza also used a variety of boilerplate phrases like "I understand", "Why do you say that ", etc ... for all situations where it does not find an answer. Its goal was not to answer questions but only to keep the conversation and let the other speak, which is suitable for most people.
This approach is inspired by the theory of Carl Rogers on conversation.

The successors of ELIZA

PARRY was written in 1972 by a psychiatrist, he takes the opposite of ELIZA which talks like a therapist and it plays the role of a schizophrenic. Faced with a psychiatrist, half the time he can not differentiate it from a human patient.

Jabberwock won the Loebner prize in 2003.

Jabberwacky won the Loebner in 2005 and 2006 and wants to go further by creating an artificial intelligence through interaction with humans. At first it proceeded mainly by imitation and evolved into a hybrid approach combining scripts and learning. The first version dates from 1981. The last name is Cleverbot.

Cleverbot is the ultimate successor of Jabberwacky, Rollo Carpenter created also. 60% of partners believe they are facing a human with Cleverbot. It increases its credibility tapping into a database of previous conversation to find the answers suiting most people.

Eugene Goostman is the first program to pass a test of humanity: 33% of attendants believed they had to deal with a human conversing with this program remotely.

Tools for making a chatbot

From chatbot to speaking robot

A first step, and a great step was taken with new voice command tools on smartphones, such as Siri and other...

If we replace the mobile by a robot, or better yet, integrate the mobile into a robot, we can give it orders.
Rather than asking what route to take to get from place A to place B, as is done on smartphones, will be asked to perform a series of tasks.
This can be achieved with a language made of a minimal set of commands, converted from voice into text instructions.
But one will in the future consider a more elaborate system capable of interpreting a request depending on the context, person, place, and the outcome of long-term effects. This implies a virtual world, as in a game with unlimited levels.