Originally, talking on the phone was all that could be done. Then came smartphones with applications. And now, with such software like Siri or Vlingo, you can not only talk to a person, but even to the smartphone itself.

And obviously, if we can make it with a smartphone, it can also do it with a robot.

These programs are capable of responding to a question, possibly by resorting to a search engine, initiate calls, send emails, find the way on a map, perform all the commands available on a smartphone. By combining the capabilities of speech recognition and chatbot algorithms, it becomes possible to interact with a robot in a constructive way.

Siri is a program far more advanced than what we experienced in voice command so far. It is able to interpret natural language, and even put your words in context. 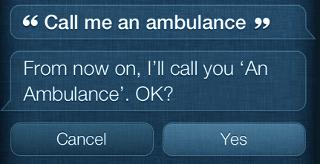 When  Siri is asked: "Call me an ambulance," he replies "From now on, I'll call you An ambulance." This is the name I give you.
This shows that even if the software works a bit like a human, that it attempts to recognize the meaning of what is said by questioning its knowledge base, there is no depth behind it, no understanding of the world in which we live.

This software is based on data from the search engine Wolfram Alpha. This explains why when asked what is the best smartphone, it quotes a device from a competitor! In this case the Nokia  Lumia 900 whose users are satisfied. But perhaps they were converted in advance?
After the anecdote has been viral, Apple has modified the program to answer: "The one you hold in your hand."!

In April 2010, Apple bought the Siri company. It then of course stopped the development of versions for Android and Blackberry.

Finally, Google has responded to Siri (Android 4.1 on first) with Google Now the service, and Voice Search the personnal assistant, which works on the same principle but is based on the search engine and its technology so that its ability to answer a question is higher. To compare is easy, just put two mobiles in front of you, an Apple and an Android and ask a question. Then look at the speed and relevance to answer, two points on which Now is the best. The voice of Voice Search is also more human.

In fact Google has data centers in all regions of the world while Apple has only one in the U.S., the reactivity of Voice Search can therefore only be higher ...

Vlingo has the advantage over Siri that it runs on all systems. It is similar in its capabilities.
It does not use a simple grammar, but a hierarchical language model which gives the ability to learn and therefore adapt to human speech. It tends to adapt at different levels: acoustic, pronunciation, vocabulary, arrangement of words.
This software is free and requires a few dollars to remove the ads. Cluzee  is an alternative for Android that presents itself as an intelligent vocal assistant. Its capabilities are equivalent to those of Siri.

Other voice recognition software for smartphones: Google voice now replaced by Google Now on new versions of the OS.