Labs are trying to let robots move like human, but other ways are explored too.

The most classic of travel is to walk or run the robot like a human. Toyota has developed a robot able to keep his balance when pushed and run at a speed of 7 km hours, so half the speed of a man. This copy of the series of robots partners, at a height of four feet and weighs 50 kg.

But robots can find creative ways to solve the problem of locomotion ... For example the transformer, the robot which transforms into a car.

OmniZero.9 could walk and also run as a process, it can turn into car!

His way of walking is not very elegant, progress has been made in this area with robot Asimo and Toyota running at 7 km/h. But his strong point is the transformation into drive.

If you like silly robots, we can also see a video of OmniZero.9 in a battle of robots. The choreography is minimal.

A more imaginative way of moving is segway. 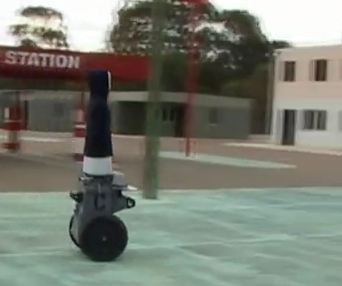 To provide mobility to its drive to combat spam, the Australian Army had the idea to equip them with Segways, those two-wheeled vehicles parallel automatically retain his balance to the passenger.
The Segway is an interesting response to displacement of robots, pending the development of a real muscle. This is a space plane, which in this case corresponds to urban land on which Australia wants to move his troops. Robots take the role of enemy insurgents, civilian hostages and other stakeholders. They move independently from Buildings.
They are interconnected and can act in an organized way, like real opponents.

The company that is behind the concept, Marathon Robotics, is being developed to Europe, the Middle East, and the United States will soon also be equipped with this system.