How to build an artificial hand

In order to contribute to the making of a personal robot, the concepts of the hand ...

Synchronization of fingers is a purely software issue actually.

In the model built by Sandia, the fingers can be removable and interchangable with the exception of the thumb. It is a model that we follow because it greatly facilitates the task.

We will provide our finger elementary sensations for it to react to external actions and act more specifically on objects, with different sensors.

Such a sensor is activated when it touches an object, it makes no difference whether the object is to meet the sensor or the sensor holder, the finger in this case, meets the object. We can found such sensors (Hitec), tiny and suitable for our use, on Roboshop.com for about $ 10.

The idea is to send a current whose voltage is dependent on the ambient temperature. It is from 0.2 volts to 2 volts and -50 to boiling temperature. A sensor as TMP 36 which is the size of a 5 cent piece costs $ 2 and is available especially on Adafruit.com.

This is not a component for mobile but precisely an object to robotics. There are circular that could integrate in a finger. They are less than $ 10 on Roboshop.com.

But you may prefer manufacture you own sensor by providing the finger with a flexible surface in which a rod penetrates into a tube inside which is opposed the force of a spring. Two contacts are attached to the two ends of the rod. When the finger touches an object, the first contact is activated and when the rod reaches the bottom of the tube, the second contact is in turn activated. The delay between the two contacts is a measure of resistance of the object touched and this measure also depends on the velocity imparted to the hand and the strength of its action.
Diagram:

Our robot can have a particular anatomy, with a finger with a sensitivity to temperature, pressure and other only touch!

The making of a finger

The joint is composed of two basic functions, gripping and moving. In the gripping movement, it is the phalanx at the end which determines the movement. But the movement of the finger is provided by it to the phalanx of the finger base. Both actions have an opposite function of expansion and contraction. It is by combining these basic actions that we can determine the movements of the hand. 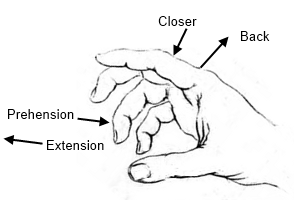 Therefore two actuators in the finger, one for the last phalanx, the other for the first. It pivots about an axis, so is fixed to the first phalanx a motor which according to the direction of rotation, moves the finger towards or back.

The end of the finger is connected to a cable sliding in a sheath and connected to an actuator as described in the article on the subject. Pulling the cable bends the finger, pushing up make the extension. The diagram below shows the principle (the proportions are not respected).

This pattern can possibly be completed by a device to block the finger once taking ensured and so complete the motor force.

Industrial products are made in metal for more solidity. We use instead resin which may be similar to the skin color, or a similar flexible material.

The activation of the hand

All the work of handling and precision is based on the software. We have for each finger four basic actions, each with different degrees. And sensation functions too.

These core activities connected by a control board to software translates into four functions of the programming language, each with a parameter for the amplitude of the action and speed.
To these functions are added events generated by the sensors: information of touch, resistance, another about temperature.

Remains to translate a desired action, such as taking an object and moving it, into commands for the actuators, while integrating the sensor data. The software must have a 3D representation of the hand. By acting on this 3D representation with the mouse, or a touch screen, we build movements that generate entries in a database, the memory associated with the hand. The program must then rely on this database to find the appropriate movements. It then adjusts the function to the distance and the shape of objects.

It is possibile to build high speed robot hand, as shows this video.