The robot to build houses

It is easier to create a mason robot that a combustion engine.

From when the original idea was born to use the explosion of a drop of fuel to move a car and the result that is a Formula 1 engine, how many improvements have been implemented! And one is forced to think that robots will eventually become as capable as humans enjoying the same level of evolution.

Evolution of the combustion engine

The carburetor mixes air and fuel for preparing combustion and to adjust the motor speed. Carburetor requires ten components that contribute to its operation. After many refinements, it is replaced by electronic fuel injection that uses sensors to measure all parameters of the air-fuel mix. This process has also undergone many changes before coming to equip the car for everyone.

The spark plug, connected to the battery, creates a spark generated by the combustion of fuel, which creates a pressure that pushes the piston. It also results from a long evolution from the beginning when it was a glowing wick, before moving to electricity.

The lubrication of the piston that allows the engine to run 100 000 km depends oils that have improved over time. It is the same in all other parts of a car gearbox, suspension, dash, etc. ...

This digression to simply to remember that when such an amount of expertise will be applied to the development of robots, they will become very efficient workers, and especially could be used to build houses and buildings in a few days. Or destroy them as quickly to replace them by more modern ones... 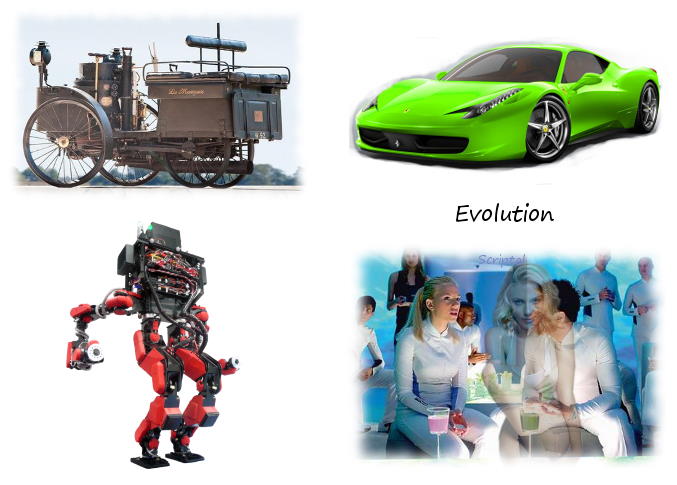 From La Marquise to the electric Ferrari, from the Schaft robot to artificial being like Scarlett Johansson

Components of the house builder robot

The evolution of the robots may go through three levels: the robot manufacturer making a limited number of gestures and working among humans, the cleaning Robot capable of maintaining a house, and finally Android resembling perfectly human beings (Scarlett Johansson is just an example).

The first step seems comparatively simple and may involve just some algorithms. It would significantly lower the cost of construction and therefore, rents.

The main algorithm is similar to that of a 3D printer. It involves moving the robot plan after plan. The ALM principle (Additive Layer Manufacturing) defines how to make objects layer by layer from a computer model. Several processes are competing, but here we are interested only in the principle: building from a program shot by shot by machines equipped with a positioning method, a simple GPS in fact, and sensors to measure distances, and artificial hands or other method of handling.

Each plan invokes identical tasks corresponding to a simple algorithm like drop a brick, soft wire, fit an item, etc. ... Nothing we do not already know.

It is also easy to train robots to perform these tasks that once stored, can be reproduced indefinitely, possibly with parameters of size and shape. The reason this is not done is probably due to the unevolved mentality of building contractors. Proposing a technological evolution to them, is as showing the first glass bottle to the Emperor Nero. Why on earth would he want to start changing the world that works so well? (for him).

Another approach in the making of a robot for building. Inspired by the principles of termite whose collective strength replaces individual capacities, Harvard researchers have realized the collectivist robot.

Coordination for distributed construction is a theory expressed since long and lead to write an algorithm to let primary agents collectively elaborate some construction. This is based on the idea that structures as complex as they are, are still made of simple elements, the fractal images from Julia and Mandelbrot being the best examples. An article in Science Mag, Designing collective behavior in a termite-inspired robot, improves again the theory and describe how robots agents can interact and change their behavior for the great design, the completion of the construction.