Drawing an arc in Canvas with the arcTo method

The arcTo method defines an arc in the extension of a straight line or another figure.

The difference with the arc method is that the point of departure and arrival are not defined by an angle but by coordinates.

In fact the arcTo plot has nothing intuitive, the coordinate points are guidelines rather than exact locations, and the same figure can be obtained with different coordinates for the end point. The figure above may allow a better understanding of this operation.

arcTo has as parameters two coordinates and a radius

The method has arguments for two pairs of coordinates, x1, y1 and x2, y2 over a radius.

But it also depends on another point x0, y0 which is not indicated in the instruction. These implicit coordinates are either those of the last point of the figure drawn previously, or the coordinates of a point given by a call to a lineTo instruction preceding that of arcTo.

arcTo therefore may be used with two methods:

or any other figure: 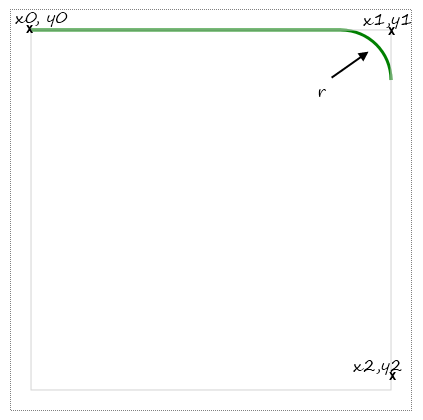 Source code of the demonstration: