Drawing a curve with Canvas

In the previous chapter, we have seen how to draw a line with Canvas. This is for a straight line, to draw a curve, two methods are offered.

1) The quadratic curve which is a parabola, thus an arc, possibly asymmetric. I has only one inflection point. 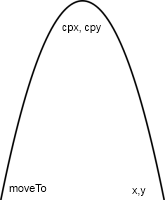 The starting point is given by moveTo(x, y).
The center of the curve depends on the control point cpx, cpy.
The end point is at x, y.

2) The bezier curve is a combination of arcs, it has at least two inflection points.

For this demo we will use a quadratic curve and it is drawn with the quadraticCurveTo function.

The full syntax to obtain this curve requires three functions:

You can specify the color and thickness with the same functions that were already used to draw a straight line:

To see how the function uses the coordinates we also placed black dots at the three coordinates used to plot the curve ...

We see that the curve does not reaches the checkpoints, the algorithm traces two imaginary straight line segments and a curve within these two segments without exceeding them.

You should also know ...