Text in HTML 5 Canvas and demo

The Canvas tag as defined in the standard allows writing text, but this feature is being implemented by browsers.

Here is how looks a text in Canvas, according to an example created with online tool Logo Maker (on this site):

It is interesting to know how writing in Canvas will works, knowing that we can use it only partially for now due the lack of compatibility.

Two methods are defined to write and they work as geometric shapes:

We will return later on this feature, when implemented on current browsers.

Some examples to check the implementation

This page is used to test the implementation of the Canvas' functions of text on a browser, with a minimalist example.

The code is not supported on Internet Explorer 8 and earlier. In this case and on all versions of browsers that do not support the tag, it is its content that is displayed, in this case the message: "Not supported!".

A text is displayed below, with a Canvas tag: 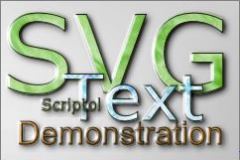