2008 was a massacre for many sites in term of traffic, including very important sites, see The Fall of the Giants below. Because the rules have changed, Google has penalized paid links, removed from its index RSS feeds and pages made of only repeated phrases from other pages. Many directories and sites of aggregation of content or digg-likes were literally cleared from the landscape.

On the other hand Google expanded services for both webmasters (Insights, Trends, Moderator, Earth in pages, Gears, Android) and Net surfers (universal search with videos and images, Knol, custom search). Roundtables with webmasters have given the answer to many questions, which was taken in our SEO section.
AdSense publishers have lost refferals and won advertising videos. The year 2008 was also that of Web applications, with the appearance of the Chrome browser, many frameworks: Silverlight 2.0, JavaFX, and Adobe platform becoming open-source.

The Fall of the Giants

Ebay, Digg, who could have imagined that these sites would see steady traffic fall. The following Alexa graphs speak for themselves ...

Digg.com. From this site comes the name "digg-like", a site where you just post links that visitors select. But the teacher is doing rather badly...
According to Quantcast, Digg would have 730 000 visitors per day late 2008. According to Comscore 500 000. See this article. 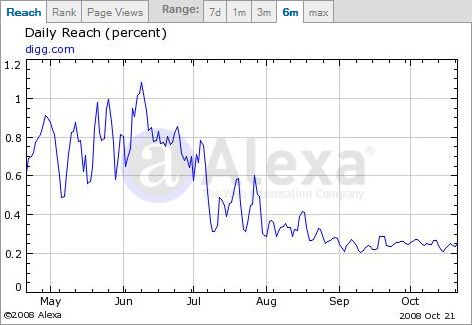 Wikia.com. Much has been said about this search engine launched by the founder of Wikipedia. But success is not there. It seems that spammers would sink the raft on which they cling. 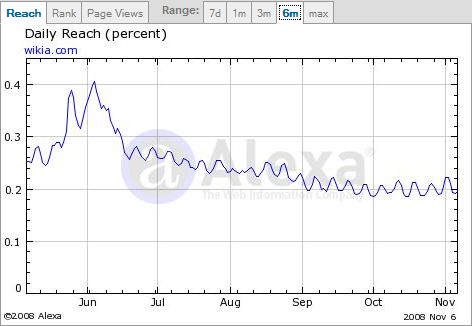 Ebay.com. On October 6, 2008 the Herald Tribune titles: "eBay to cull 10 percent of its global workforce."
Goarticles.com. Leading online press releases. Google has them in its collimator, as they said in the meeting with webmasters.
Allposters.com. Sells posters and poster art.
Prweb.com. Another press release site. Not vey healthy either.

In 2008, following a discontinuous trend, Internet overtakes newspapers and magazines on paper as a source of information.
This is the result of a survey conducted in the United States, by the Pew Research Center.

For the younger that thirty, there is also a constant decline of those who use television as a source of information, but it is still used by 59% of respondents.
There are about a third of Americans who read news about Iraq, the actions of the administration against the economic crisis, or the Madoff case.
Two-thirds are interested in gasoline prices, or was interested in the president elect.
The subject that interests most Americans is the information concerning the country's economic situation.

The latest version of Mono provides greater compatibility with the Microsoft version of .NET. In the final version released today, the following features of .NET are implemented... 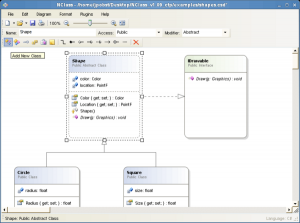 A new content management system, to make blog initially, complements the long list of these tools of the Web 2.0, and it is Microsoft that provides it open source. Its name is Oxite.

Pragmatic, Microsoft has for some time denounced open source as a scourge, to finally join the movement by creating even a dedicated platform, the Codeplex.
On the Codeplex, you now find Oxite which is mainly intended to promote ASP.NET and demonstrate the possibilities of this language of the Web. ASP.NET implements the MVC (Model, View, Controller) architecture, which separates data and user interface, and thus allow adapting the interface or facilitating exchange of data.

Oxite offers all the functions needed to manage a blog, which will makes it - subject to the limitations outlined below - a competitor to software leaders such as Wordpress and Dotclear.
But the philosophy of the project which is aimed at developers and provides a comprehensive and easy to use development tool (far beyond what you may have for PHP), makes that we should see in the future Oxite competing with more complete CMS such as Drupal, Joomla, fluxBB, phpBB, etc ...

In addition, the ASP.NET is a proprietary language and he only works on a Windows server and .NET. It is conceivable, however, to run Oxite under Mono one day, and thus on Linux server.
You must also use Visual Studio Express at least to develop the CMS, which is available for free to download.

The project Oxite is somewhat stalled. The number of downloads is confidential and the last version of February 2009!

Analytics is experiencing a revolution

Google announced seven innovations in its free statistics tool Analytics. Analytics can measure the audience of your website, to know from where come visitors and what interests them on the site. It is possible for example to see what links on the pages are clicked by visitors.
But Google wants to go even further and adds seven improvements that are being propogated by geographic region.

Adsense and the API are in private test at the moment, the others are in beta and by invitation or visible in some areas, but in a few weeks, the public will enjoy all of them.
The integration of Adsense help to determine which pages make most of income, and will allow to lighten the site or find the best places for ads, so increasing its incomes.
Segmentation is a sophisticated mean for confirmed webmaster to divide the site into subsets and analyze trends. It will be able to create filters to isolate parts of traffic easily with the mouse.
Motion Charts will replace the traditional graphical display by animated graphs in three dimensions.
It is a technology provided by the purchase of the Trendalyzer Gapminder company in 2007. It allows to see in 3D relationships between data by keywords.

The project aims to change the world and to help the greatest number, with an idea to realize and for that Google commits $ 10 million. This number as the name of the project commemorates the 10th anniversary of the society. But in addition, 10 power 100 is a googol, a number that inspired its name to the company.
This amount will be shared between 5 ideas, they must be submitted to Google before 20 October 2008.

The areas covered by the project are varied (there is a check box for each in the form):
- Energy.
- Environment.
- Health.
- Education.
- Housing.
- Community.
- Opportunity.
or any other field.

A year later, Google announces that it received 150 000 ideas. They are so numerous as to see clearer, it was decided to classify them into 16 themes.
3000 people in the world (25 languages and 170 countries) are working to classify them.
But you can now vote to select the 5 most interesting themes.

All that was found in articles published on Scriptol.com, the site of webmasters... In our specialized sections and in the news:

New scripts on the Scriptol site:

Go to 2009. We should see the frameworks implemented in sophisticated offline Web applications. Other sectors such as mobile Web should be considered.
The challenge for webmasters is now to provide both services and content to be indexed, and Scriptol.com will be here to provide useful information ...

Comscore, an organization that provides statistics on Internet, announced that the number of Internet users was 1 billion in decembre 2008 which is around 15% of the global population (7 billions).

Note that the proportion of people connected in each country would have given a very different classification. Google, Microsoft and Yahoo are most visited websites.
Source Comscore.

Evolution of Social Networks in 2008

Comscore is a website that regularly publishes statistics on the most important sites on the Web. Recently it has presented a comparison of the major social networks and their evolution during the previous year.
In social networks are included sites that host profiles, but also blogging platforms like blogger.com and wordpress.com, which also provide social network services. Also included are sites for sharing photos or videos.

Below them we may found LiveJournal, Xanga, Bebo, Tripod, etc...