The browser as OS: failure on the smartphone

Firefox OS is an operating system using Web technologies, as WebOS before. However, their designs are different. Both use HTML 5 as an interface but webOS is based on Node.js for the backend while FirefoxOS offers a backend based on Web standards to interact with the device. In the latter case, Web applications are the software. The user experience is also different, webOS was praised for its fluidity and its multitasking capabilities while Mozilla say itself that FirefoxOS did not offer a satisfactory interface. Mozilla has learned the lesson of the limited success of its system and renounce to promote FirefoxOS as mobile OS, even if it is to continue to use it on other devices.
Before it, webOS had experienced the same misfortune, HP bought it with the Palm company, but it has never been used and was resold for use with connected TVs.
The fate of Tizen, Linux system using HTML 5 as the application interface too, is less clear and depends on the will of Samsung to promote it on mobiles.
The browser as a mobile OS has inspired publishers, but is struggling to compete with Android, however the technology is not the cause. It is rather the unlimited number of Android apps against which it can not compete, which is the reason.
December 9, 2015.

Eiffel was a proprietary language, but many open source implementations have emerged. Sather was the first one, which then diverged from the original language and have been replaced by more consistent implementation like Tecomp, SmartEiffel, etc ...

Rebol was also marketed. An open-source compiler, Red, appeared that over time has made useless the acquisition of the original. At present, the site still offers a commercial product but the interpreter became open source and available on GitHub.

MathLab is a development tool and a scientific programming language. A free version of the language exist, however, Scilab.

Wolfram Mathematica platform is probably the last proprietary and general-purpose language. There is an open source alternative in Julia, which is not compatible. In the list of the most popular languages, there is also SAS, a statistical language and ABAP, a dedicated language.

A law firm in the US warns potential customers. Oracle sales teams can use all the weight of its LMS (License Management Service) in its audit practice to require customers to engage in its cloud services. VMWare users especially can be trapped to the extent that Oracle does not recognize the partitioning tool, and when you only run an Oracle product as an host, all cluster hosts are imposed licensing fees! This is one tactic among others such as the habit to charge on services that are not used. Usually customers do not understand the Oracle licenses, think should pay for a single product as they engage unknowingly to pay a multitude of licenses for exorbitant sums. A good reason to explore open source alternatives before committing.
October 15, 2015.

Customers of the Standard Edition must also know that it disappears on December 1, 2015. To add licenses, they have to migrate to the SE 2 which is more limited or EE which is significantly more expensive.
November 16, 2015.

The new compression algorithm from Google is currently the most efficient if is taken into account both the compression ratio and decompression speed, to retrieve the content in its original form.

The compression ratio is the ratio between the size of the original content and the compressed content. Brotli thus reduces the size of a file over 75%. As decompression speed is also very fast, almost 300 megabytes per second, it is an ideal format for the files or web pages to download. It remains to wait for the support by all browsers.
September 23, 2015.

The Blue Screen of Death 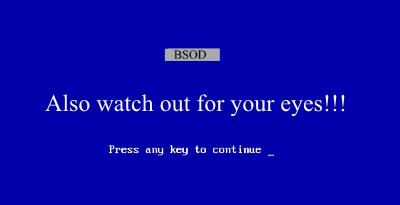 It has long been know, but this was further confirmed by a recent study by INSERM: the light emitted by the LED flat screens (or curved) is bad for the eyes and especially that emitted by blue LEDs. The Windows blue screen of death is doubly mortal: it also attacks your sight!
It is highly recommended to use a black background for your computer. On the one hand you save electricity because the LED screens unlike the past phosphor screens consume more power when the image is clearer than when it is dark, the other will prevent your retinas to deteriorate (even, and especially if you are under 20 years).
Windows with a white background are not worth much better than the blue screen because blue is one of three components that are used to obtain the white color. It is better also to choose a dark page background when it is allowed by the software!
August 19, 2015.

Statistiques on programming languages in 2015 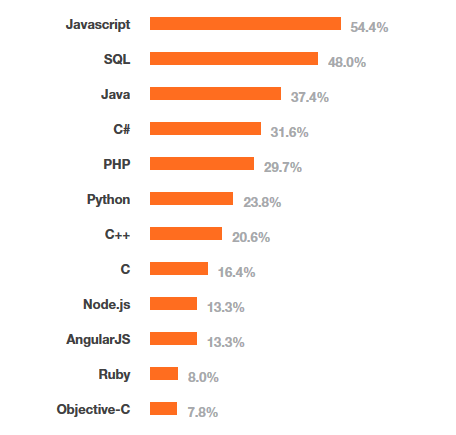 These statistics come from StackOverflow the forum for questions about programming and do not reflect the entire IT business (there are more Linux users than on Windows on StackOverflow). It is the number of questions asked on the site.

JavaScript is subject to more questions and related technologies, Node, Angular are also well represented.
Java is the most widely used server side language.

OpenGL is the interface to the graphics cards to produce 2D and 3D applications on all devices, desktop and mobile. It is managed by the Khronos Foundation. It has announced its replacement by Vulkan, a more general API that not only allows you to call graphic functions, but give fully access to graphics cards and use their potential, even to achieve non-graphical calculations (that is made by OpenCL). It replaces also OpenGL ES, the mobile version of OpenGL.
With this new model, the programmer uses a compiler that produces SPIR-V bytecode, and this bytecode is interpreted by Vulkan. The compiler can support C, JavaScript, Java and other languages. OpenGL remains supported and usable to program with higher level functions, for CAD for example.
This initiative is largely the result of the will of Valve, member of the Khronos Group, to have the equivalent of DirectX 12 on Linux and SteamOS on which it distributes its games.
For the anecdote Khronos is the Greek god of time and destiny and Vulkan the Roman god of volcanoes and metal. Not related to Star Trek.
March 3, 2015.

"Bringing asm.js to the Chakra JavaScript engine in Windows 10".

This is Microsoft's blog post and it's signed by the head of JavaScript development. Chackra JIT is the interpreter of Internet Explorer from the verison 9. Asm.js is a subset of JS usable as bytecode for any language including C and C ++ are compiled by Asm.js Emscripten. Call you back as 3D Unreal Engine game engine works in the browser Asm.js.
There's even a cooperation between Microsoft and Mozilla to help implementing Asm.js in IE!
The benefit to Microsoft here, besides that it allows IE or Edge the next browser, to stay modern, and allow online software like Office 365 to run quicker.
February 19, 2015.

Node.js becomes a democracy and is merged with io.js

The future of the platform will no longer be decided by a single company, Joyent, but by a foundation with several major partners. There are The Linux Foundation, Microsoft, IBM, PayPal, Fidelity and of course Joyent. This occurs after the split that has created Io.js, gathering the leading developers. The reason for the split was the autocratic way in which decisions about Node are taken.
These companies, and mainly IBM and Microsoft provide Node as a development platform in the cloud, which is why we find Microsoft beside Linux! And why it is Microsoft that supports Node and not Google, while Node is based on the V8 JavaScript interpreter of Google! But Google seems to give its support to Io.js.
The question is whether after this first step, a democratic decision board, will be accomplished the second step, the merger of Node and Io.js or the integration of the Io.js code in Node, because it has the advantage of supporting nearly all ECMAScript 6, the classes, generators and iterators. This merger is uncertain but talks are in place between technical staff of the two projects..
February 10, 2015.

Update September 9, 2015: The foundation announced the availability of Node 4.0, result of the merge of Io.js 3.0 and Node.js 0.12. The combination of the two projects has 44 employees in addition to the many contributors. Node 4.0 supports ECMAScript 6 as implemented in the last versions of the V8 JavaScript compiler.
Those who thought that Node would never reach version 1.0 have finally been right.