Visual Studio free for all devices

At the same time it makes the entire .NET free and open source for all systems, including Mac OS and Linux, Microsoft decided to create a Community version of Visual Studio also totally free. The professional version is identical but required for business.
There was already a version of Visual Studio Express for different languages and for Web applications, but this time it is the complete tool with its visual interface for building apps that is available to developers. They can use this free version to make paid apps.
November 13, 2014.

This JavaScript framework of widgets for Web applications was widely used, especially by Yahoo! itself which used it for all its applications. But times have changed and YUI is now obsolete.
The authors invoke Node.js on the server side and its ecosystem that is changing the way applications are made, and on the client-side frameworks like new React and Angular which do much that YUI, providing data-binding, reactive programming, adding new HTML tags ...
HTML 5 also provides more widgets and YUI is a heavy framework that is not suitable for mobile. Thus developments are stopped and with no update, the framework has no future.
August 29, 2014. 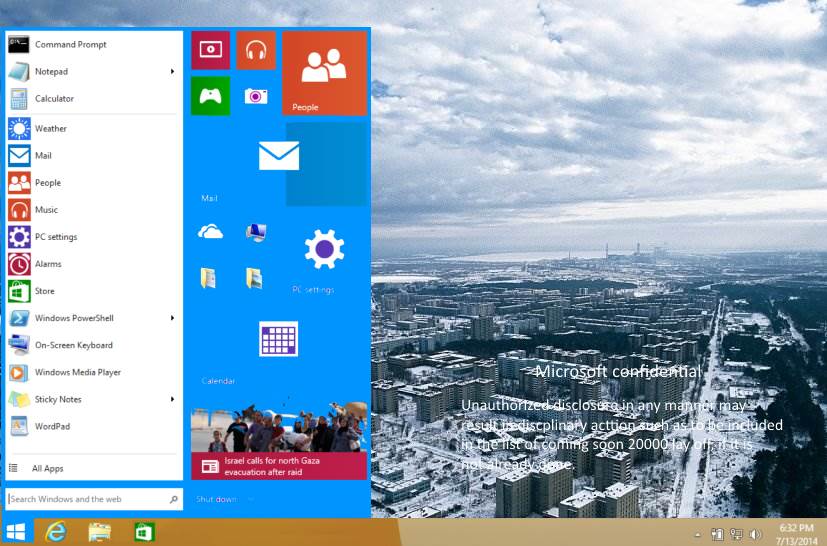 With its start menu that should never have left us and intimidating message ;) Or maybe a fake?
Juily 15, 2014.
Image in the background is a city near Chernobyl.

Popularity of programming languages in 2014

To assess the popularity of the languages​​, in order those which are used in the largest number of programs, IEEE selected 12 criteria, and 10 different sources. This can give an indication to those considering becoming a programmer, or providing any services related to languages​​. You can also see the article on what language to each type of application.
But be careful, things change quickly, eg Objective C could be replaced by Swift in coming months.
Furthermore, this classification differs significantly from the TIOBE index of June 2014, which provides in order: C, Java, Objective-C, C++, Visual Basic, etc. .... It appears that the IEEE promotes textual references to a language rather than the usage statistics (HTML behind Java) It also differs from the GitHub classification and remains approximate. 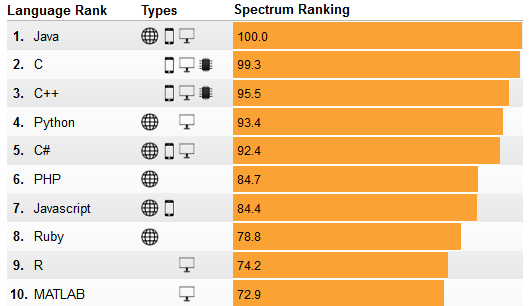 To get a ranking taking into account both the TIOBE and IEEE results, I have made a script to calculate a mean and displayed the ultimate rankings in this article: Popularity of programming languages in 2014.
July 7, 2014.

Uncrunched reveals why you read so many article on Internet Explorer lately ... bloggers and other news writers are rewarded when they write a favorable article about the browser and especially when they marvel at the possibility of obtaining a version for developers. A copy of the letter received by the editor shows how one is asked to write an article and to add links to the article on his network ...
Unfortunately the site has always said opposed to such practice and has published the letter which gave rise to this response from marketing manager of Microsoft:

Hi Michael - sorry to have bothered you! I'm not sure how you wound up on the list. Go TechCrunch!

TechCrunch is a competitor to Uncrunched site, also founded by Arrington, but sold to AOL. Apparently it would be more complacent.
June 18, 2014.

We only know that public and open source CMS such as Wordpress, but publishing groups have for most their own software, designed to optimize advertising revenue with the presentation of news. A such tool must also help to make multiple copies, more or less summarized (seam carving for text). The New York Times uses Scoop. Vox Media has Chorus CMS. Others use a version of Drupal or Wordpress customized to provide the same services and integrate with their information sources.
It is in this category that fits the purpose of the Google project underway to manage the content and advertisements at the same time and possibly add a shop. Indeed, the firm now wants its own CMS. It is possible, however, that the competition makes it renounce because Wordpress has become increasingly universal and Drupal easier to use. If the project materializes withal, we guess it will be created with the Go language. Maybe this is one of the motivations behind the project?
June 18, 2014.

Contribute to a 3D World project

If you have already made an innovative open source software and want to be helped in achieving an open source project for 3D, Google offers Tango, an initiative to save the environment in a database. With an Android mobile, everything around you is stored a program able to reconstruct a scene in 3D to allow the use of these data in an application.
For which application? This is where we ask for your contribution, you submit an idea, you have until March 14, 2014.
Updated June 6, 2014: The deadline has been extended and the tablet is available for $ 1024.

Why Red Hat supports it CentOS ?

The source code for Red Hat Linux distribution is required to be under the GPL license, because Linux is distributed under this license, those who take the code must do the same.
This allows CentOS to provide for free the Red Hat distribution to those who do not need the support offered by the firm with the red hat, and who can not or do not want to pay.
It often happen that users of CentOS are also those of Red Hat, it allows them to use it for free where additional OS support is not essential, like that is on an enterprise server basically.
When Red Hat announced the Voltron project, an improved CentOS distribution achieved with the help of Red Hat, arises the question. Why help whoever provides your product for free?
In fact, the Red Hat distribution itself is free, if you want to compile yourself the code. Only the package in binary form is chargeable. Red Hat is under threat from Oracle. Without much shame, the database maker itself distributes Red Hat in binary version and renamed it "Oracle Linux". With a support cost inferior to that of Red Hat, that makes it a serious contender (even if the support is also inferior since they do not know the code very much).
It is then that CentOS can become an ally. Moving from CentOS to Red Hat can be done instantly, but this is not the case if you want to switch to Oracle Linux. Red hats want to make it even harder. After making use of their source more difficult by incorporating all their own copyrighted patches, which hampers CentOS as Oracle, they want to give access to this patched source to CentOS to make the transition still easier to Red Hat. Mystery explained.
January 9, 2014.