News about computers and mobiles in 2018

Microsoft Edge browser never again lagging behind others because... replaced by Chromium 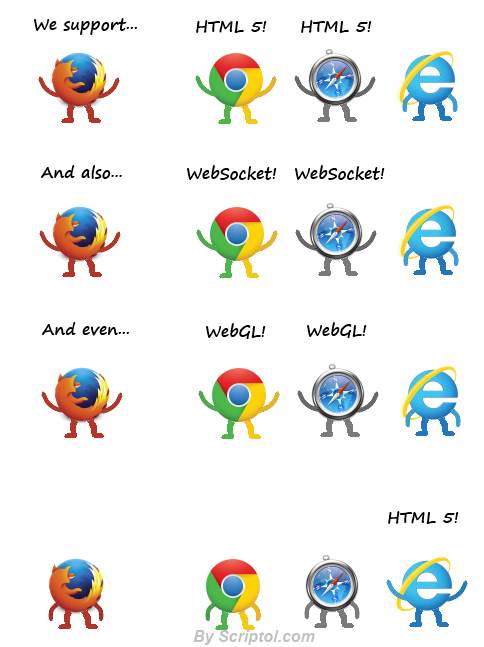 The firm announced it officially on its blog: Its Edge browser will no longer use its own EdgeHTML rendering engine, it is replaced by Chromium, the open source engine developed primarily by Google on the basis of WebKit developed by Apple, and itself derived from KHTML, the KDE rendering engine on Linux.
So a software designed for Linux has become the basis of Internet browsing on Mac, Windows, Android and iOS!
Microsoft notes that it already uses open source tools in Edge, such as Web Audio and Google's Brotli compression tool.
It announces its intention to become a major contributor to Chromium, which will also benefit the browser Chrome and Electron which should evolve even faster.
This is good news for the developers, because Edge was always late for the implementation of new standards in HTML, JavaScript or CSS, always arriving after Chrome and Firefox. They no longer have to build two-speed applications. The image on the right is no longer relevant ...
December 6, 2018.

The service was launched to counter Facebook, and with big means. It was difficult to connect to a Google service without being asked to open an account on G+. Then, facing a lack of commitment of the users, its existence became more discrete.
After discovering a security breach, Google has decided to close the consumer service (the enterprise version will stay) and made an announcement in a blog post.

Facebook on its side has recently experienced a data leak that affected 50 million users. But still has not decided to close the site.
September 9, 2018.

In August 2018, a group of investors sued Oracle for defrauding them. Oracle would have assured them last year that its customers were converting massively to its cloud services, but in reality, Oracle does not even dare publish its sales statistics in this field now.
The complaint explicitly describes extortive tactics and threats to customers to force them to go to their cloud services. What they are in no hurry to do because competitors, AWS, Azure or Google Cloud are more interesting. And less worrying!
Source Bloomberg.
August 13 2018.

Why the blue leds of the screens ruin your sight

It has long been known that the blue light produced by computer screens, or mobiles and televisions accelerates the degeneration of the eyes with age.
But why?
Researchers have discovered that blue light causes reactions in a molecule, retinal, which is a form of vitamin A. This molecule is essential to the functioning of the eyes and is present in quantity inside it. The blue light degrades it and transforms it into a poison that damages the photosensors of the eye. These never recover.

There are two ways to preserve your sight against this attack:

It is clear that Microsoft is more concerned with advertising for Windows than with your health. Yet you should still replace the beautiful blue screen provided by default (when it is not replaced by that of a manufacturer) by a black screen, less beautiful but which will not make you blind over time.
Also prefer applications with a dark theme rather than a white background.
August 9, 2018.

When will Apple be only the 3rd manufacturer?

According to IDC and Canalys, in the second half of 2018, Apple is no longer the second largest manufacturer of smartphones. But the sales curve is cyclical, the firm will resume its second place at the end of the year with its new models, and for a time only. When will Apple finally lose completely its second place?
If the evolution of the respective market shares continues according to the same trends, the following graph provides the answer:

Click to enlarge. Figures are in millions of units sold.
August 1, 2018.