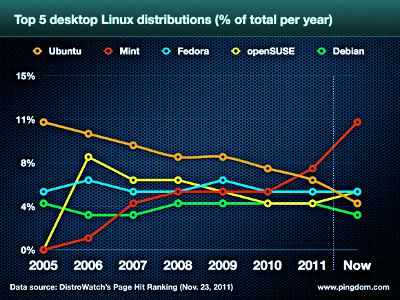 Decline of Ubuntu, according to Distrowatch

According to statistics from Distrowath, the popularity of Ubuntu has been in decline since the introduction of the Unity interface that disappoints users of desktop computers, while users of tablets that it should satisfy, are not very many!

Mint is the distribution that takes place with a very classic Gnome interface that offers what users expect from an interface: an easy and understandable access to applications! In version 12, Mint provides Gnome 3 in an interface modified to keep the look simple and classic users have always appreciated!

Gnome Shell 3 and KDE 4, both offer innovative interfaces designed without consulting the users. Programmers do what they like in the absence of any regulatory authoritie, it  is the downside of free software.
It is true that Steve Jobs thought that one can not ask users what they want before to have introduced a new product they could not imagine the utility, but Jobs was making simple and intuitive products that is the opposite of these new interfaces ... The message is misunderstood!

HP moves from WebOS to Windows 8

HP has decided to stay in the tablet market with Windows 8. This goes in the direction of using a tablet to replace the desktop computer.
It had previously decided to no longer sell tablets under WebOS.
October 28, 2011.

A competitor to Metro: Plasma Active

KDE announces a Linux interface designed for touchscreen devices.
Icons are replaced by activities that include application and documents related to a task. We are immersed in an activity while Metro wants to immerse us in an application. The interface and apps are designed for a touch action. Also the interface, based on Qt, is designed for all screen sizes.
It may already be tried on OpenSuse and Meego.
October 12, 2011.

You will be meet my little friend ...

Righthaven is a firm created just to sue sites that reproduce the contents of its customers.

Las Vegas Review warned bloggers that used its contents as a quote, quotes which sometime duplicate a big part of the articles:

"So, I'm asking you nicely once again—don't steal our content. Or, I promise you, you will meet my little friend called Righthaven."

That was in September 2010. A year later, Righthaven lost all trials it has filed on behalf of "fair use", the right to reproduce a portion of an article where the author is cited, and the firm is ordered to pay $ 34,000 legal fees.
Worse, if it does not pay, its property will be seized, including the software used to detect duplicate content on the Web. This will go to those who were unfairly attacked, what do they do with it, who knows?
September 20, 2011.

Perpetrators of illegal downloads would be the best customers ...

According to a statistical study conducted by a major research center, the GfK Group, the image of the pirate who downloads music or movies, and let lose of billions for the industry is in fact completely artificial and only due to the paranoia of publishers.
As the study shows instead that those who make illegal downloads are also those who buy the most! The purpose of these downloads, often of inferior quality, is not to obtain the product without pay, except the case where the person lacks of resources (and is not potential client in fact), but rather to try the product before choosing.
Internet users are simply applying the principle of shareware to other media ...
The statistical study was sponsored by a company of the disc which was so offended that it decided not to publish the result, says Torrentfreak. This is confirmed by another study reported by The Guardian.
July 21, 2011.

After the +1 button that extends to the whole world today, Google unveiled a project on that it worked for a year and appears to be an obsession of the firm: an tool to create an online group and exchange content. It embeds Circle which has already this goal but also other tools.
The aim is to connect people, but within a group, of workers or others.
Up to 10 people can communicate with each other via video conference, which goes beyond what Facebook offers.
The user can create or participate in several groups. His friends are moved from one group to another by drag and drop.
Google+ Sparks presents a collection of articles, photos, videos according to your chosen focus (as WDYL but with an implicit request).
After the failure of Buzz, Wave and the local scope of Orkut, Facebook's direct competitor, Google tries again to revive a social network that would facilitate its advertising business, with a best reception from webmasters this time.
June 29, 2011.

The WDYL site offers a new way of presenting search results. As a magazine page, but with all the articles centered around the query, the blocks represent semantic categories. One way to follow the news on his favorite topic by opening a virtual newspaper each morning ...
Example in the future of search engines article.
June 28, 2011.

Worldwide use of browsers in June 2011 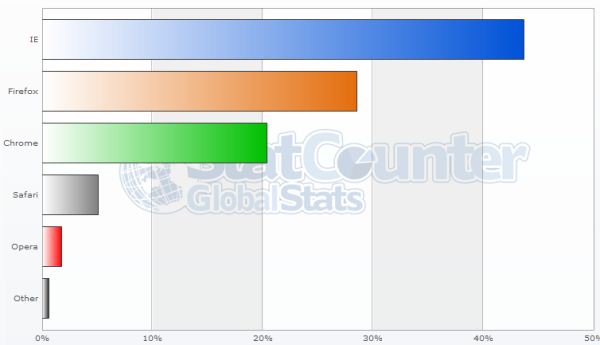 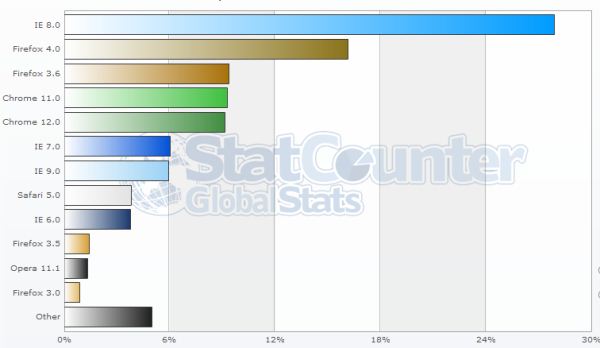 We note that IE continues to lose users, Chrome reached 20%, Firefox 3.6 is not abandonned, some users are hostile to version 4. IE9 despite the support of SVG and Canvas, do not really take off and remains behind IE7. This will change with the progress of Windows 7 in percent of computers. The good new is that IE6 is now less than 4%.
60 % of browsers now used support HTML 5.
(Data provided by StatCounter).

With a new button to place on your pages, net surfers may indicate that they liked your articles. This looks like the Facebook's Like button or a retweet. This allows Google to compete with Facebook, but may turn it into a digg-like.
The goal is to enable those who have the same interest as you to find your pages more easily. But when you see what happened to the majority of digg-likes, this is doubtful.
Completely handled by groups of users, what is even the case of Digg, they highlight articles without interest produced by members of these groups and this have caused public disinterest and the end of many of them.
In addition it will not help readers to discovers new sites, as sites with lot of visitors, will have more clicks on the button.

The results of the clicks are displayed for members of Google accounts who are your friends, so only a network of members.
But it can have another effect: These pages are constantly visited by the robot's search engine to update the data, this may be a way to have his page crawled more often...

The new JavaScript code for ads Adsense uses an iframe to load asynchronously and to remove the latency when loading pages. Google says that each page wins a half-second ...
The JavaScript code included in the page does not need to be changed.
This new code would also make Adblock inoperative since it is loaded after it.
March 17, 2011.